There seems to be a consensus, especially amongst government circles, that the recovery is underway and that the private sector is providing us with the jobs we need. The green shoots are really showing.

To help with this by instilling confidence and to give people some sort of idea as to when the Bank of England would be putting rates up Forward Guidance was introduced by the new Governor, Mark Carney. One of the central planks to this was that the Monetary Policy Committee would consider raising rates when unemployment falls to 7 percent – it is already on the verge of doing this but the MPC has decided to once again keep rates at the historic low of 0.5 percent and maintain the asset purchase programme at £375 billion.

The economy, although maybe strengthening, is still in a delicate state and one turn of the ratchet too far by raising rates too early could strangle growth off in a heartbeat. Conversely, leaving it too late would risk overheating the economy. Timing is everything.

At the moment one gets the feeling that even if the unemployment rate was to fall significantly below 7 percent there would still be no movement in monetary policy. The get out clause of the three ‘knockouts’ built into forward guidance would probably be used to delay it as long as was needed.

But the knockout clauses are not very specific, so what will the MPC be using to decide how long to keep rates on hold – the old methods leaving us just as much in the dark as we always were maybe?

Andrew Goodwin, senior economic adviser to the EY ITEM Club, believes that the policy of forward guidance is in tatters and that we will see a return to the old ways.

“All thoughts turn to next Wednesday when forward guidance is set to be laid to rest. Although unemployment is still technically above 7%, recent indications suggest this threshold will be hit imminently. The MPC has no option but to revisit it next week. The Bank’s courtship with forward guidance has been brief and is now in tatters. 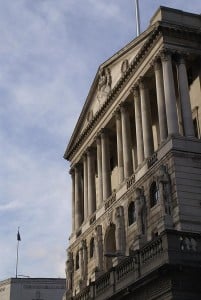 “Falling unemployment was expected to act as a diagnostic for the wider economy. But this has not proved so – real wages have failed to grow, and business investment is still in the doldrums.

“The Bank will want to focus on a broader range of measures going forward, and not pin their decisions on one key indicator. This will effectively be returning to the style of monetary policy conducted before forward guidance. The Bank will continue to insist that rates will stay low, and hope the markets believe them.

“Fortunately for the Bank, inflation has become better behaved and looks well anchored. They still possess credibility, which is vital for controlling inflation expectations. This will give them time to wait for a period of real wage growth and a broadening out of growth before they raise rates. Raising rates prematurely would risk choking off the recovery.”