Where to Invest When Key Stock Indices Struggle to Climb Higher

Key stock indices were going through a rough patch from the beginning of the year until early February. Now, they seem to have some momentum to the upside. With this, investors are asking what kind of upside potential is possible. Will the key stock indices continue to increase and break above their previous highs, or are we due for another sell-off like the one we saw earlier, and only then will we see some good buying points?

Let me begin by saying what I have said many times in these pages before: 2013 was a stellar year for key stock indices, but now they need to breathe a little. The key stock indices may go above their all-time highs made at the end of last year, but the move isn’t going to be as robust. You might see a slow, dreadful move to the upside.

If this scenario does play out—key stock indices moving slowly and breaking above their all-time highs—the fundamentals are suggesting it won’t be a significant move. 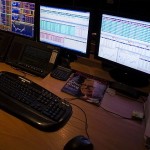 Major names on the key stock indices are reporting horrible sales. Consider Caterpillar Inc. (NYSE/CAT), a major industrial goods manufacturer, for example. The company reported its revenues declined 16% in 2013. Its profits declined from $8.48 per share in 2012 to $5.75 per share in 2013. Going forward, Caterpillar isn’t very optimistic. The company said, “We expect sales and revenues in 2014 to be similar to 2013—about $56 billion in a range of plus or minus 5 percent.” (Source: “4Q 2013 Earnings Release,” Caterpillar Inc, January 27, 2014.)

Don’t forget: corporate earnings, at the very core, are the most basic factor for a rise in key stock indices.

When looking from a technical analysis point of view, the key stock indices show there’s a struggle and investors aren’t as excited. Please look at the chart below of the S&P 500. 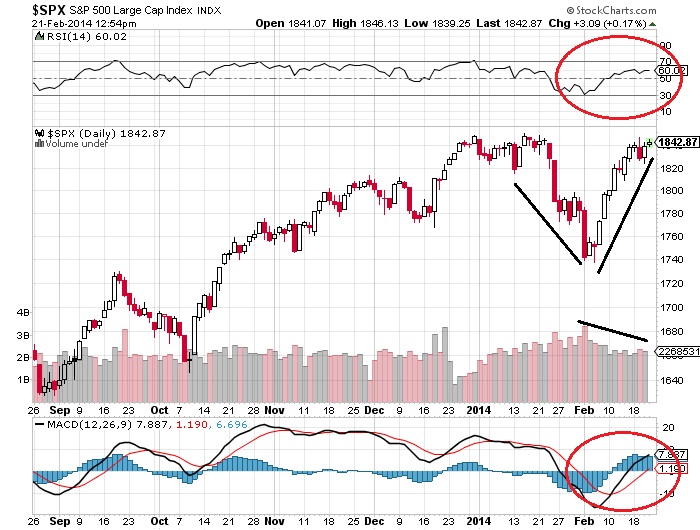 After the S&P 500 dropped in the beginning of the year, it recovered in a classic “V” formation, which showed momentum, but there was something interesting happening at the same time: we saw volume decline quickly, while the indicators that suggest strength and momentum (red circled area in the chart above) show the bulls are losing steam.

In times like these, long-term investors should resort to investments that can provide them with safety, especially in case there’s a sell-off, as these types of investments will protect their portfolio from being affected all that much. These investors may consider looking at exchange-traded funds (ETFs), like iShares Gold Trust (NYSEArca/IAU) for safety, or iShares MSCI USA Quality Factor (NYSEArca/QUAL). The latter ETF holds big-cap companies, which tend to show more stability in times of uncertainty.

This article "Where to Invest When Key Stock Indices Struggle to Climb Higher" by Mohammad Zulfiqar, BA was originally published at Daily Gains Letter.

What impact will Virtual and Augmented Reality have on the Out-of-home advertising industry?