As the euro crisis rumbles on – with the ECB slapping the Spanish Government on the wrist after its attempt to engineer a back-door bail-in for Bankia – investors are demonstrating that they are increasingly nervous about where to put their money. But financial market participants are not the only people that are worried about what will happen to their savings if the worse happens; ordinary people are also concerned. So where would your money be safe?

A first and critical point is that any decision about where to invest depends on your attitude to risk. If your primary aim is just to make sure you don’t lose money, then your decisions will be very different from someone who (also) wants to get a return on it. The reason that Germany can borrow for ten years at an interest rate of just 1.4% is because you will almost certainly get your money back. Spain has to pay more than 6% to compensate for the extra risk involved – there is a greater chance that Spain might one day fail to pay its debts.

Most people should probably also be worried about currency risk. If I put my money into German Government bonds, and the euro then falls sharply against sterling, I could end up getting fewer pounds back than I put in. This is worth bearing in mind. In principle exchange rate movements could then be offset by different inflation rates, but in practice this link is far from perfect.

What about popular crisis plays? Gold is sometimes held up as a ‘safety asset’, but you need to be careful about exchange rate effects here. Part of the reason that gold prices are relatively high, at close to $1600/oz, probably reflects concerns about the dollar, which will have to depreciate to help close US trade and fiscal deficits. If that future adjustment is already priced in, then the gold price might not respond much when it happens – and, again, your $1600 of gold would then buy you fewer pounds than it did before. On the other hand, if a full-blown meltdown causes investors to run for the safe haven of the US, the resulting jump in the dollar could be accompanied by higher $ gold prices if people pile in, or perhaps weaker $ gold prices if the true ‘global’ price of gold was broadly unaffected.

Fundamentally, though, these considerations illustrate that any kind of commodity play – or indeed any asset with significant price volatility – is not really a ‘safety’ option. Volatility alone can kill returns and result in capital losses, depending on when you get in to and out of the trade. If you are genuinely risk-averse, then you should want to avoid uncertainty and volatility in returns. Under that logic, commodity markets are probably not for you any more than picking equities on spread-betting platforms in the hope that you can ‘spot the bottom’. 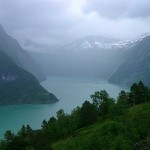 In fact, on this basis one place to put your money if you are nervous is UK government bonds (index-linked, if you worry about inflation). But if you can stomach a little exchange rate risk, Norwegian Government bonds might be a better bet. No, seriously. Norway may be a relatively small country of about 5 million people, but it is also possibly the safest borrower out there. Gross government debt is around 50% of GDP – pretty much middle-of-the-road by global standards – but net debt is *minus* 170% of GDP, according to the latest estimates. Norway’s financial assets (and in particular its sovereign wealth fund) are so large that it could easily pay off all its debt if it wanted to. The government has simply taken a conscious decision not to, in part so that its bonds provide benchmark ‘safe’ interest rates for investors. Norway will be AAA-rated long after the likes of France and the UK get downgraded, and even if Germany gets sucked into funding a euro bailout. The downside of this safety is that a 10Y Norwegian bond paid a yield of around 2.3% in April. But currency movements could also be helpful here – in the event of euro collapse, the Norwegian Krone would probably appreciate rather than depreciate versus the euro (and also against the pound) given its role as a safe haven. Australian bonds would be an alternative, based on similar logic.

For most people, though, leaving the money in the bank is still a safe option. The UK might get downgraded this year, but it is not about to go bust. And under the existing compensation scheme, the first Â£85,000 of an individual’s bank savings are guaranteed. Recent research from the Bank of England found that the average amount of savings and investments across households (excluding housing and pensions) was around Â£21,500, and 16% of households had no savings at all. So, to be honest, if you have more than Â£85,000 sitting on hand at the bank, you can probably afford to take the odd risk or two with the excess. But do check with your financial adviser first.

The great inflation and growth myth