New research on postcode sectors from LCP ranks SW1 X in Belgravia as most expensive, whilst W1(D,F) in Soho has the highest long term growth history and W1(T,W) in Fitzrovia win top investment postcodes.

A quick snapshot of the Prime Central London (PCL) residential property market made up of London’s two most exclusive boroughs, the Royal Borough of Kensington and Chelsea and the City of Westminster, reveals that the average price reached £1,552,400 in the first quarter of 2014. Prices have increased on average 10.64% per annum over the last two decades or so, since Land Registry records were first published in 1996.

This geographical definition of PCL as provided by London Central Portfolio (LCP), specialist property fund and asset managers, is the tightest available, and the statistics analysed by LCP, which records every sales transacted through Land Registry, are by definition the most accurate and comprehensive. However, it is a fact that even within this tiny area, average prices and long term growth vary significantly amongst the 200,000 properties or so that are housed within it.

LCP have, therefore, analysed transactional data in PCL’s 51 postcode sectors, which include the first letter and number suffix e.g. SW1X 7.

Whilst some postcode sectors have been by necessity grouped together to provide a statistically significant sample size, this has enabled LCP to demonstrate the very uneven average prices and different rates of long term appreciation on an almost street by street basis.

With pockets of non-prime properties located next to traditionally affluent areas and council estates running side by side charming stucco terraces, neighbouring postcodes have distinctly different appeal. LCP’s analysis has enabled them to pinpoint the eight postcode sectors which offer the best investment record, on the basis of best value for money combined with best growth history. These will make up the core focus for their fourth property fund, London Central Apartments II, which has just launched and is accepting subscriptions.

It comes as no surprise that postcodes located within the international heartlands of Belgravia, South Kensington and Knightsbridge reigned supreme in terms of average price.

• This rose from second place pre-credit crunch, replacing the SW3 6 postcode in Chelsea, which at £3,448,195 is now rated as the third most expensive.

• In second place is the SW7 (1,2) postcode in Knightsbridge, around Ennismore Gardens and Imperial College with an average price of £4,064,674.

• Reflecting the vast price diversity in PCL, the SW1V 3 area of Victoria that runs alongside the River Thames posted the lowest average price of £593,600, almost 7.5 times lower than the most expensive postcodes. 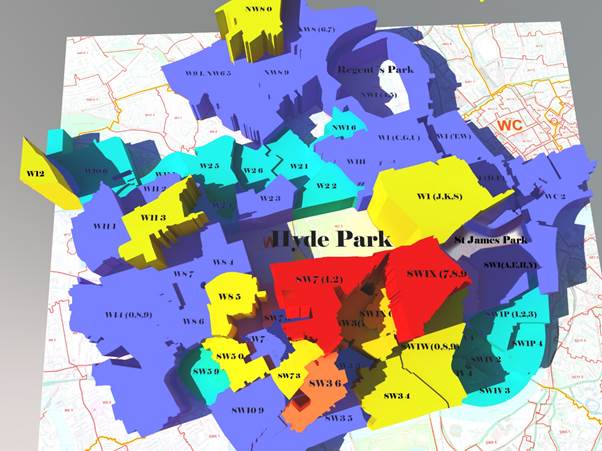 The map demonstrates a general trend in the market, with the most expensive areas located towards the south side of Hyde Park, radiating out in an arc towards the west and the east.

• 13 postcode sectors are above the £2million mark

Ranking of postcode sectors by rate of price growth

As a ‘go to’ destination, a financial centre, and premier league provider of education resulting in demand outstripping supply, it is again no surprise that price growth in PCL is consistently high across all postcodes. Even at its lowest (SW1V 3 in Victoria which also records the lowest average price) long term average price growth has been 8.24% per annum, far higher than most other asset classes.

• As a general trend, the strongest price growth is seen to swing eastwards around Hyde Park – starting from St James and going up to Mayfair, Marylebone and Fitzrovia.

The strong growth in these areas reflects the fact that they are in Central London’s epicentre, the best served by the Jubilee line which links to Canary Wharf, the Heathrow Express from Paddington, the Eurostar from Kings Cross and the soon to be completed Cross Rail. 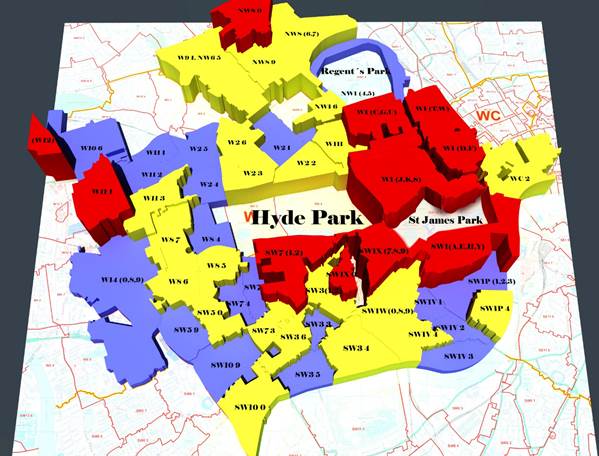 It is also interesting to see the high levels of growth being enjoyed by postcodes abutting to the north of Hyde Park, in particular, Bayswater (W2 3) which has experienced 11.64% per annum, ranking it 12th in the growth charts.

“As a company, LCP specialise in maximising investment returns for its clients in the Central London residential market so being aware of price points and long term growth trends in every street in PCL is vital. Despite being such a tiny area with little more than 200,000 households, there are numerous micro-markets with substantial differences from postcode to postcode. The highest growth area has demonstrated returns of almost twice the lowest despite being located less than 2 miles away from one another” comments Naomi Heaton, CEO of London Central Portfolio.

Capital appreciation is the most important investment consideration in PCL as it is the largest contributor to total returns for residential investments. Indeed, a recent survey from Sotheby’s International Realty said that whilst location is the key focus for 36% of affluent buyers, an almost equal number (34%) are driven by investment returns.

In their analysis, LCP have identified those postcode sectors which both show patterns of greater than average price growth and offer lower than average house prices. There are only nine which fulfil these two criteria. These represent the top value for money investment areas, as they offer the potential for the greatest capital appreciation with the smallest relative upfront capital input.

• As evidenced in the above map, these postcodes are concentrated towards the east of Hyde Park in the Marylebone, Fitzrovia and Covent Garden postcode sectors.

• These are all areas which have gone through a significant gentrification process over the last 20 years.

• They benefit from Central London’s iconic traditional architecture and the growing desire to be right “in the action” and close to transport links.

LCP have identified that W1 (T,W) in Fitzrovia, which runs between Portland Place and Tottenham Court Road, tops the league table. An area which has been historically under-priced and over-looked compared with other places in PCL. It has an average price of only just over £1m (£1,132,089) whilst enjoying long term annualised growth of 12.37% per annum. 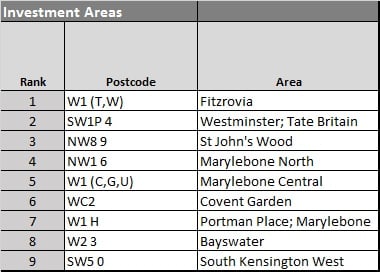 “Although every property needs to be scrutinised on its merits individually; Fitzrovia, Marylebone and Bayswater have been top of our ‘buy’ list for some time. This new analysis allows us to further quantify the investment upsides here. Whilst the mandate for our fourth Central London Property Fund will remain the same; to acquire a portfolio of 1 and 2 bedroomed properties in all the prime postcodes surrounding Hyde Park, focusing our attention north and east of The Park will allow us to build a more diversified portfolio with the highest potential returns for our investors. We are targeting 100 properties for the £100m total fund size” concludes Naomi Heaton, CEO of London Central Portfolio.

In their next report on postcode sectors, LCP will identify the forthcoming hotspots for future growth.