Most reasonable people would expect a political party that tells you what it stands for would then vote in a way that backs it up.

But it seems that this is not always the case, especially where Members of the European Parliament (MEP) are concerned.

In order to give the UK electorate an insight into what is going on a UKIP promoted website has been set up (theyletyoudown.com) to give us the lowdown on both the good and the bad.

The site also points out where conflicts of interest arise.

This is what Nigel Farage, the UKIP leader had to say about it:

The site itself has a ‘Wall of Shame’ to show who has let us down and also a ‘Wall of Honour’ to highlight those that stand by their principles.
The site also has a menu of issue areas and also a lengthy list of recent votes. 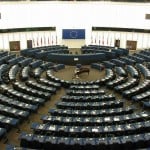 As an example, under a vote to remove all barriers to immigration within the EU, there were 521 votes in favour (including all Labour and LibDems), 48 chose to abstain (including all Tories) and only 33 against (including all UKIP).

But when talking in Britain the Tories always say they will control immigration. So why abstain?

And it’s obvious what Labour and the LibDems really want isn’t it?

Why a Regulated Cannabis Market Would Improve Public Health

Beyond the Politics: European investment opportunities amid political turmoil