* The number of transactions over Â£2m in PLC have risen 60% compared to last year.

* Positive news for England and Wales: price growth has increased by 5% over April 2012, transactions by 3%.

* The most expensive sale took place in a terraced house on Bolney Gate, The City of Westminster for Â£18,250,000.

* The cheapest sale also took place in a terraced house. This time in Egremont, Cumbria for Â£7,000.

April 2013 statistics released last week by HM Land Registry have shown property prices storming ahead in PLC. House prices in the heart of the capital rose 13% over the year to reach a new high of Â£1,379,142 – 6 times higher than England and Wales. The average price in the country has reached Â£234,957, showing a fractional growth since March. However, versus this time last year prices are 5% higher.

The healthy performance for PLC has been buoyed by a number of high value transactions being registered and a particularly strong performance above Â£2m. Transactions here have increased 60% with 88 purchases taking place this month, compared with 56 in April 2012. 5 sales were also transacted above Â£10m with the most expensive sale taking place in Bolney Gate, The City of Westminster, SW7 1QW – a terraced house which sold for over Â£18m.

“The stimulus of the low cost of sterling, cheap debt and the Capital’s enduring appeal has fuelled a further influx of international investors. This has led to increased transactions at the top end of the market which is contributing to the upward rise in average prices” comments Naomi Heaton, CEO of London Central Portfolio.

This month also brings good news for the Government as transactions in England and Wales shoot up, increasing 12% in just one month. Perhaps an indication that their much trumpeted stimulus schemes have begun to take effect. 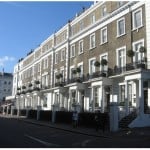 The most notable increase in sales in England and Wales has been in the Â£200,000 and Â£250,000 price band where transactions jumped by 15%. Average prices are now rapidly approaching the Â£250,000 mark, where Stamp Duty leaps from 1% to 3%, a rise in tax from Â£2,500 to Â£7,500. With more and more buyers piling under the barrier, the Government needs to urgently re-evaluate this threshold so that the market can operate freely again.

“When the tax was first introduced it was never intended to be a tax on the ‘every-man’ but now it is seriously impacting on the average home buyer. Since 1997, when stamp duty was increased to 3% for properties over Â£250,000, average prices have increased by over 3 times. However, the threshold has never been revised upwards. It is time the Chancellor took action to enable people to trade up opening up the market for first time buyers, rather than continuing to line the Exchequers pockets.