In my previous commentary, I discussed the third-quarter gross domestic product (GDP) growth and how it was really weaker than it appeared. The Federal Reserve should realize the underlying weakness in personal spending, business investment, and export sales.

The nonfarm payrolls reading released on Friday was also suspect. On the surface, the creation of 204,000 new jobs in the jobs market in October seemed spectacular, given the U.S. government shutdown during that period. Apparently, the impasse didn’t impact the October jobs market, according to the U.S. Bureau of Labor Statistics. (Source: “Employment Situation Summary,” Bureau of Labor Statistics, November 8, 2013.)

But then there are other numbers that shed some light on October’s count. Given the Briefing.com estimate of 120,000 new jobs, the October jobs market reading appears to be spectacular. An average of 190,000 new jobs have been created each month over the past 12 months. The stock market appears to be scared by the numbers (fearing a drop in quantitative easing), but the reality is the economy needs to see about 400,000 to 500,000 new jobs created each year to maintain a healthy jobs market. The average jobs growth is supported by the weak revenue growth by corporate America. It’s clearly time to take some money off the table on stocks now.

The problem is there are only about 3.4 million or so full-time jobs available and based on the rate of jobs growth, it will take quite a while before the number rises to a point where the true unemployment rate falls to healthier levels. 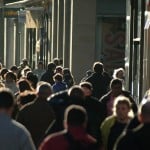 There are also the 2.3 million workers the U.S. Department of Labor Statistics groups as “marginally attached.” These workers are not included in the unemployed count or the unemployment rate, because they were not active in the labor market in the four weeks prior to the official count because they’ve given up.

And what makes me question the jobs market continues to be the quality of the jobs created. Many are not highly skilled jobs requiring college education but, of course, many college graduates are working at these jobs because it’s so difficult to find jobs in their field of study.

In October, jobs in the leisure and hospitality area accounted for 26% of all jobs created. The low-skilled food services and drinking area accounted for 14%, while the retail sector generated 22% of all jobs. In all, that means 62% of the 204,000 jobs created in October were from these three low-wage-paying areas. I wouldn’t consider this great news for the jobs market, as America needs to deliver better jobs—and plenty of them—not only to existing workers, but the hoards of college graduates entering the jobs market. Based on how the economy is growing at the two-percent range, improving the quality of jobs created is not going to be easy and could impact the labor market for years to come.

While the Fed may keep buying bonds, the economy and jobs market pictures suggest you should take some profits off the table.

RADA and Elsewhere Reinvent the Bard for Business

Eurozone chaos and mayhem ensue amidst a raft of rumour whilst ECB cuts rates by 0.25%