Why a Recession for the U.S Economy Within the Next 12 Months Is Inevitable

One fact has become quite clear: if we want to see robust growth in our gross domestic product (GDP), then there needs to be a significant change inÂ consumer spending.

But current consumer spending in the U.S. economy is looking bleak, and it makes me skeptical about the GDP growth ahead. We’ve already seen GDP in the first quarter revised lower due to consumer spending; and it won’t be a surprise to me if something similar happens in the second quarter.

Don’t just take my word for it. Look at what the CEO of Family Dollar Stores, Inc (NYSE/FDO), Howard R. Levine, said about consumer spending while presenting his company’s corporate earnings for its fiscal third quarter (ended June 1, 2013):

More proof that consumer spending (which makes up a major portion of our GDP) isn’t as robust is the fact that wholesale trade sales are down and inventory figures are up. Inventories at wholesalers in May were up 3.3% as compared to a year ago. And inventories of durable goods were up 4.8% in the same period. (Source: U.S. Census Bureau, July 10, 2013.)

Inventory build-up is an indicator suggesting consumer spending isn’t what it was expected to be. In addition, surging durable goods inventories also suggest that consumers are not spending on their wants, but instead focusing on their needs for now.

Consumer spending on nondurable goods—goods that don’t last for long periods of time, like clothing—isn’t great either. From the fourth quarter of 2012 to the first quarter of 2013, real personal consumption—consumer spending adjusted for price changes—increased by just $14.6 billion, or 0.7%. (Source: Federal Reserve Bank of St. Louis web site, last accessed July 11, 2013.)

Nothing has changed in the U.S. economy. The daily struggle for many Americans continues. Following the financial crisis, many Americans are now working at jobs that pay minimum wage or have part-time positions, while others are losing their skills the longer they are out of work.

That’s why I’m predicting the opposite of what so many analysts and economists are forecasting: they see growth, while I see the U.S. headed back to a recession within the next 12 months.

Did the Federal Reserve just tell us it wants much higherÂ inflation?

In the most recent meeting minutes from the Federal Open Market Committee (FOMC), it said:

“Most [members], however, now anticipated that the Committee would not sell agency mortgage-backed securities (MBS) as part of the normalization process, although some indicated that limited sales might be warranted in the longer run to reduce or eliminate residual holdings. A couple of participants stated that they preferred that the Committee make no decision about sales of MBS until closer to the start of the normalization process.” (Source: “FOMC Minutes,” Federal Reserve, July 10, 2013.)

Simply put, the majority of the members of the FOMC think the Federal Reserve shouldn’t sell the MBS it has accumulated on its balance sheet through its multiple rounds of quantitative easing.

While the key stock indices rally, and stock advisors continue to say we are going much higher, if the Federal Reserve doesn’t go ahead with this action and keeps the MBS on its balance sheet, this move could have serious implications ahead.

Mark my words: the biggest problem will be inflation.

This is how it works: if the Federal Reserve keeps the MBS it has bought from banks for the sake of providing liquidity to the financial system, then that will increase the money supply—which always causes inflation. 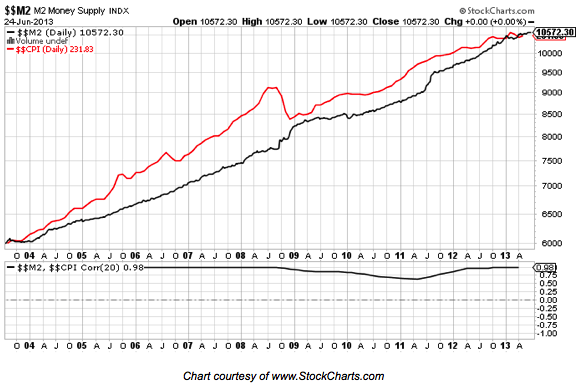 Clearly, the correlation between money supply and inflation is very high and shouldn’t go unnoticed.

We are already seeing some inflation, even if the official numbers suggest otherwise. Some mainstream economists are even saying we may see deflation ahead. They will soon find out they are wrong.

Dear reader, I am a consumer, and I go out and shop. I notice that the price of gas has increased substantially, and containers of our favorite foods are shrinking in size with a “no price change” tag slapped on them. Inflation will get much worse, and possibly even get out of control, unless the Federal Reserve starts pulling back on its $85.0 billion-a-month printing program.

Buy to Let: Is it worth the time?