On Sunday, we saw the results of the election in Germany, the powerhouse of the eurozone. Angela Merkel won again. Her re-election sent a wave of optimism through Europe. I can just hear the chants declaring “the worst is over for the eurozone” starting up again.

Sadly, the reality is completely the opposite. The eurozone is still deep in trouble and an economic slowdown still persists there. My opinion has not changed about the region: the downturn is going to stay for a long period of time.

A record unemployed population in the eurozone still remains an issue and further strengthens the argument of the depth of the economic slowdown. Unemployment is not only high in the debt-infested countries in the region; it has also become a problem for even larger countries like France.

Bad bank loans in Spain, the fourth-biggest hub in the region, reached a record high in June, with 11.6% of all bank loans now outstanding considered “bad.” And the biggest lenders in the eurozone country are saying this rate will increase. (Source: Reuters, August 19, 2013.) 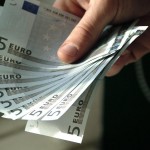 With all this, what continues to concern me is the affect of the economic slowdown in the eurozone on U.S.-based companies. In 2010, European sales had accounted for 13.5% of the collective sales of all the S&P 500 companies. Fast-forwarding to 2012, this number declined to 9.7%. (Source: S&P Dow Jones, August 2013.) This means U.S.-based companies are losing revenues from the eurozone, the reason for which is none other than the economic slowdown there.

Where will U.S.-based companies go next to recover their lost revenues from the eurozone? We know the U.S economy is doing poorly, so it will be difficult to increase sales domestically. The Chinese economy is experiencing an economic slowdown as well, so U.S. companies cannot look to China for growth either.

Corporate earnings and revenue growth for U.S. companies do not look good for the current quarter—and they’ve been stagnant all year. Be careful, dear reader, with that rising stock market. The U.S. economy is not an isolated island. American companies trade with other countries. If those countries don’t want to buy, we suffer.

6 Tips for Site Security – Keep Your Staff and Employees Safe