Why all politicians must now reject the mansion tax idea

With Labour having failed to pull the Liberal Democrats into their mansion tax trap, it’s time for all politicians to drop the notion because such a policy would result in capital flight that the country can ill-afford, says the boss of the world’s largest independent financial advisory firm.

The comments from Nigel Green, chief executive of the deVere group, follow the Lib Dem decision today not to vote with the opposition on the proposed levy on properties worth Â£2 million or more.

Mr Green says: “Now MPs have had the debate on the issue, it really is time that politicians of all persuasions stopped political point-scoring and abandoned the idea of a mansion tax because, as the Laffer Curve demonstrates, there comes a point when taxing the wealthy becomes counter productive for raising revenue.

“Should a mansion tax come into effect it would, inevitably, result in capital flight – right at a time when the UK needs all the revenue it can get – because the wealthiest in society are the ones who have the resources simply to move to a lower tax jurisdiction to protect their wealth.

“Since the notion of mansion tax started topping news agendas in recent times, our advisers have reported an increase in the number of international investors and high-net-worth individuals who are enquiring about relocating themselves and their assets outside of Britain to safeguard their funds.”

He adds: “I suspect that a mansion tax would be the final straw for many of Britain’s wealthy – who contributed almost 26 per cent of the UK’s total income tax in the last financial year – because they would rightly feel aggrieved that they would need to pay another tax on a property that was bought with money that has already been taxed, either through inheritance or income tax, plus they will have paid stamp duty on the transaction and will be paying council tax.” 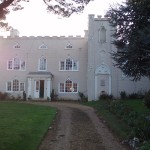 Nigel Green insists that MPs should take such warnings seriously if they are to avoid capital flight.

He observes: “Legal international tax migration is a global phenomenon which is becoming increasingly mainstream.Â  We can see this anecdotally thanks to the high-profile cases of actor GÃ©rard Depardieu,Â  luxury goods magnate Bernard Arnault, and Facebook co-founder Eduardo Saverin, amongst many others, who have all recently moved from high to low tax jurisdictions.

“Indeed, the OECD is so concerned by the trend – because its member governments are losing revenue as people move to shield their funds elsewhere -Â  that it has recently published a report “Addressing Base Erosion and Profit Shifting”, attacking tax competition between jurisdictions.”