Many accuse China of manipulating its economic data to fit what the market wants to see, yet this kind of behavior doesn’t appear to be isolated to China. It even occurs here—if you believe what the New York Post reported in a recent editorial. If it were true, to be honest, I wouldn’t be that surprised.

According to the article, there are allegations that the Census Bureau fabricated jobs market data reflected in the non-farm payrolls reading in 2010 and that this continues to occur. (CNBC, “Faked data may have boosted 2012 job reports: NY Post,” CNBC web site, November 19, 2013.)

But whether there may or may not be manipulated data within the monthly jobs market reading, I’m not here to determine that. All I can say on the matter is that how the jobs market data is reported and what is reported has always been suspect to me.

The government tells us there are about 11.3 million Americans unemployed in the jobs market, representing an unemployment rate of 7.3% in October. Now think about it; what does the reference “unemployed” really mean? The government seems to let you think it implies the number of individuals looking for work in the jobs market—but that’s not the case.

There are millions of workers not included in the unemployed numbers because they have dropped out of the workforce or have given up looking for work four weeks prior to the report. The problem is these people should still be considered unemployed regardless of the criteria used by the U.S. Department of Labor. But we all know that the number of unemployed in the jobs market is probably in excess of 20 million workers—and even more if you count those who are underemployed or working part-time because they cannot find full-time work.

While you may not think it’s an issue, the rise in the unemployed in the jobs market and the widening disparity in income levels between the bottom and top earners is a real problem that will eventually boil over. It’s not good for the country, and it could wreak havoc down the road should the problem continue. 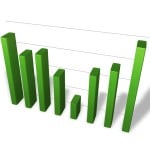 A major issue is the group of workers classified as “long-term unemployed.” These are generally the workers who have been pounding the pavement and sending out hundreds or even thousands of resumes only to face continued rejection. Just consider the study by the Federal Reserve Bank of San Francisco, which noted that those who have been unemployed for at least six months have a 10% chance of landing a new job each month versus a 20%–30% probability for the newly unemployed. (Source: Lowrey, A., “Caught in unemployment’s revolving door,” New York Times, November 17, 2013.)

Folks, there’s a jobs market crisis out there. Don’t fall for the 7.3% unemployment rate reported. The underlying number should be in the double digits, like what we’re seeing in the eurozone. If the jobs market was healthy, we would see stronger corporate revenue growth, but we’re not. This is a red flag that indicates corporations are stalling, which suggests an overblown stock market. Given this, I would suggest investors take some profits off the table and/or have put options in place. The reality is that if it wasn’t for the Fed’s easy money, the stock market rally would not have been as strong.

Massaging the reported numbers may make them look better on the surface, but we all know that the jobs market situation is much worse than reported.