Because no one saw the cold winter weather coming, Americans have been left hungry, cold, and without vehicles or shelter. Though somehow, people too cold to get bread, groceries, or other staples still managed to stock their shelves with soup. Campbell Soup Company (NYSE/CPB) bucked the winter-blaming trend and said its quarterly profits surged 71% year-over-year to $325 million, or $1.03 a share.

But that’s not what I’m getting at…

The most recent industry to use the weather-related get-out-of-jail-free excuse is the housing market. I mentioned recently that the National Association of Home Builders (NAHB) said its monthly housing market sentiment index experienced its largest drop in history, from 56 in January to 46 in February. A score above 50 indicates positive sentiment; below that, it’s negative. (Source: “Poor Weather Puts a Damper on Builder Confidence in February,” National Association of Home Builders web site, February 18, 2014.)

In line with negative homebuilder sentiment, perhaps it’s not a huge surprise to discover that construction of new homes sank in January. U.S. housing market starts tanked 16% in January to a seasonally adjusted rate of 880,000—the lowest reading since September and the largest month-over-month drop in three years. Further breaking down the housing market starts, single-family housing construction dropped 15.9%, while apartment construction was down 16.3%. (Source: “New Residential Construction in January 2014,” U.S. Census Bureau web site, February 19, 2014.)

Again, judging by all the headlines, you’d have to be daft to think the sharp decline in housing market construction could be blamed on anything but the weather. But if you actually delve into the numbers a little, you’ll see that weather is the least of the housing market’s problems. 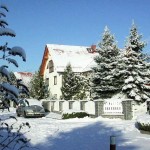 By region, construction was actually up a staggering 61.9% in the snow-pounded Northeast after two months of declines. In the Midwest, construction dropped 67.7% to a record-low 50,000 units at an annualized rate. Construction was also down 12.5% in the sunny south and 17.4% in the balmy west.

Christmas is not to blame for debt