As Italy’s upcoming election dawns closer and closer our news is suddenly being diverted to the most unlikely of political candidates, Beppe Grillo. Grillo being a famous Italian comedian and actor, who has recently captured the hearts of many Italians with his outspoken and critical approach to politics.

But what is important is not the characterisation of Grillo in the media as a comedic protest vote, but the reasons why he has sprung into the Italian political sphere, why he has gathered so much support and simply why so many people are compelled to vote for a candidate like Grillo.

Giuseppe Piero Grillo founded the ‘Five Star Movement’ in 2009, a party that doesn’t have an extensive ideology but opposes normative concepts such as; corruption and instead proposes ‘democracy’. But what’s significant about this party?

The party represents a growing demand for change, by overthrowing the current political elites with their institutionalised ‘corruption’ and replacing it with the modernity of a new generation of people, who have grown up in the age of technology and unfettered free market capitalism. "They must all go...!" Grillo exclaims to crowds of enthusiasts. What the ‘Five Star Movement’ symbolizes is the awakening of the public’s consciousness to a dying political system. What we see in Italy is the outbursts of people who see a deficit in the representation of ‘ordinary people’.

What we need to ask is; What does Grillo represent? Grillo gives us an opposition candidate that isn’t tainted by the political class, a person who looks at the system and recognizes its flaws. This is something that many politicians fail to do in order to uphold their position in that system and not be seen as a radical.

Grillo has not sprung into popularity by coincidence. We must remember this is a time when governments across the EU (and beyond) impose austerity measures on its citizens in order to salvage their economies from economic crisis. A crisis caused by governments investing in the economics of a neoliberal market. This anger towards politics comes from politicians’ inability to regulate the globalised market and the fact that austerity means ‘the ordinary person’ has to suffer its costs as a result. This is where a candidate like Grillo grows in popularity, in that he can stand on the periphery of the political system and say ‘look this is happening to me too, I’m a victim of this just as much as you, we can unite on this issue.’

Is Grillo just an image of Italian Anti-Politics? If we evaluate current movements like ‘Occupy’, ‘The G8 Protests’, ‘Anonymous’ etc, we can see there is an undercurrent of voices protesting against the current political system across the globalised world. These movements show us that there is a demand for change. People have little faith in party political systems anymore; this is evidenced by the declining number of people affiliated to a political party or to Trade Unions. And this is where the death of party politics begins…. 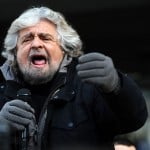 Whilst political parties continue to ignore the undercurrent of Anti-Politics they will continue lose credibility. Here we can draw comparisons to the UK. Why do so few people turn out to vote lately? Why are the Westminster ‘catch all’ political parties declining in support? Why did Clegg mania spread in the last general election? Why are nationalist parties such as the SNP doing so well?

In short, voter turnout is so low because many voters don’t see politics as something they can affiliate themselves with anymore. Parties are declining in support because many people recognize that the political system doesn’t represents them, this is no surprise here in the UK with the numbers of politicians who are privately educated filling our front benches in the House of Commons. In the last general election ‘Clegg mania’ took over because the Liberal Democrats were something new, something we hadn’t had before, untainted by political power. The reason the SNP has taken over Scotland is because they also were something new, an alternative to Labour. Grillo acts as this very same opposition type candidate for Italy.

Grillo is not a laughable protest vote and should not be underestimated. Grillo represents the voice of change that people want to see. And until political parties evaluate the reasons why people like Grillo are the new face of politics, then they resign themselves to a slow death.

The Baroness writes to the PM