Why China's Insatiable Appetite For Coal Has Likely Peaked

A recent report from Greenpeace found that China's coal consumption declined in the first half of this year and new Chinese government data suggests that the country's coal imports have dropped. Estimates indicate that by the end of the year, China's coal imports could be 8 percent below 2013 levels.

China imported 18.86 million tonnes of coal in August, the lowest level since September 2012.

Part of the reduced demand is due to a slowing Chinese economy. After years of double-digit growth rates, China's GDP expanded by just 7.7 percent in 2013, and it could struggle to hit its 7.5 percent target this year. Some analysts are predicting an average growth rate of only 6 percent in the next few years.

But a lower GDP growth rate is only part of the reason. As the Sierra Club's Justin Guay points out, China may be beginning to "decouple" its growth from coal consumption. In other words, China's economy could continue to expand even while its coal consumption drops – something unthinkable not long ago.

That's due in large part to China's declared "war on pollution," announced earlier this year.

Years of increasingly choking smog have sparked public anger and even led to protests. In 2013, a government survey of 74 Chinese cities found that all had pollution levels that exceeded levels the World Health Organization deems safe.

"We will resolutely declare war against pollution as we declared war against poverty," Premier Li Keqiang said in March. The plan calls for the closure of old and dirty steel, cement, and coal plants: An estimated 1,725 small-scale dirty coal plants are expected to be shuttered. The government also declared it would spend $275 billion in the next three years to reduce pollution. 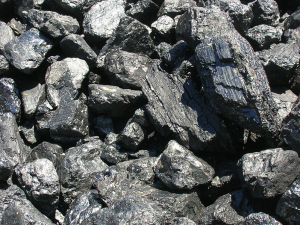 China has also set up environmental courts, instituted fines for offenders of environmental standards, granted non-governmental organizations the right to sue polluters, and now requires the nation's largest factories to disclose pollution data to the public.

The efforts are starting to pay dividends, as evidenced by declining coal import levels. This is a major reason that international coal prices have reached their lowest levels in six years. And the low prices are not succeeding in stoking a resurgence in demand.

And more declines could be coming, thanks to a series of proposed new laws. The central government a draft version [1] of a law on Sept. 10 that amounts to an outright ban on coal with a high sulfur and ash content. This could significantly hurt coal exporters, like Australia and South Africa.

The government is also seeking to cut coal production by 10 percent [2] because low demand is causing economic losses for 70 percent of China's coal companies.

And in 2016, efforts to slash coal demand will likely only accelerate, considering China's announcement that it will introduce a nationwide cap-and-trade program. Details are murky, but if successfully implemented, major producers will be incentivized to improve efficiency and switch to cleaner sources of energy.

As the world's largest consumer of coal, as well as the world's largest emitter of greenhouse gases, the significance of China's policies on coal use cannot be overstated. Thanks to a concerted effort by the government to improve air quality, the era of insatiable Chinese demand for coal could be over.