Is it an early Christmas present or a really early April Fools’ Day trick?

In a somewhat surprise move, the Federal Reserve decided the U.S. economy was doing well enough that it could start to cut back on its generous $85.0-billion-per-month quantitative easing (QE) strategy.

I say “surprise” because the Federal Reserve initially said it wouldn’t consider tapering until the U.S. economy was on solid, sustainable economic ground, which meant an unemployment rate of 6.5% and inflation of 2.5%. Today, unemployment sits at seven percent and inflation is near historic lows at below one percent.

Against a weak economic backdrop, the Federal Reserve made a brave and daring decision to slash its monthly QE policy by a paltry $10.0 billion. That means that instead of pumping more than $1.0 trillion into the U.S. economy next year, it is only going to inject $900 billion. In other words, the U.S. national debt is going to increase by $900 billion. (Source: Press release, Board of Governors of the Federal Reserve System web site, December 18, 2013.)

If the U.S. economy really was on solid footing, Fed Chairman Ben Bernanke would have made a bigger dent in his monthly bond-buying program. Instead, he made a token gesture as he gets ready to hand the baton to Janet Yellen early next year.

Yup, after injecting $4.0 trillion into the U.S. economy, the country is little (or no) better off than it was before the Fed initiated quantitative easing. U.S. unemployment is down from its Great Recession high of 10% in October 2009, but it has yet to break the seven-percent level. Meanwhile, the underemployment rate has hovered around 14% since 2009.

That said, the Fed’s mostly symbolic tapering is the beginning of the end for quantitative easing. But it’s not like there won’t be an abundance of cheap money to be had. The Federal Reserve tempered anxious investors by suggesting its key federal funds rate would stay lower than previously expected. 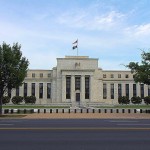 But for how long? It depends on whether or not the Federal Reserve’s unemployment rate target is hit. For now, Ben Bernanke said the Fed will keep the federal funds rate at 0.25% until unemployment gets down to 6.5% or “beyond”—which could mean even lower.

What does that mean for investors? It means that investors should continue investing the way they have been.

The Federal Reserve has kept interest rates near zero since late 2008 and has signaled it won’t raise its federal funds rate until unemployment hits, at the very least, 6.5%—a mark that, according to the Fed’s own projections, won’t be reached until late 2014 at the earliest, probably even into mid-2015.

That means plenty of cheap money will be fuelling the stock market for at least another year or so. And that points to another year of record-highs for the S&P 500 and Dow Jones Industrial Average.

This article Why Fed’s Change of Plans Doesn’t Mean a Change in the Stock Market by John Paul Whitefoot, BA was originally published at Daily Gains Letter