Gold bullionÂ prices started their run-up way back in 2000, when the commodity was trading around $300.00 an ounce. From there, it took the precious metal 12 years to break above $1,900 an ounce—an unprecedented move. When an investment, such as gold bullion, rises 500%, a pullback in the “advance” is quite normal.

The fundamentals of the precious metal’s charge haven’t really changed. Demand for gold bullion is strong, while supply is actually dwindling as gold miners cut back on production, adjusting for lower gold bullion prices.

Central banks, which I believe will be the major force behind the rise in gold bullion prices going forward, are still buying as the decline in gold prices hasn’t scared them away. My position is that central banks need gold to protect their reserves. According to the International Monetary Fund (IMF), this past June, the central bank of Russia increased its gold bullion holdings for the ninth straight month. (Source: Reuters, July 26, 2013.)

Other central banks are doing the same. Central banks from Azerbaijan, Belarus, Bulgaria, Greece, Kazakhstan, Kyrgyzstan, and the Ukraine added gold bullion to their reserves in June.

Similarly, China, which competes with India for the position of world’s biggest consumer of gold bullion, is showing increasing demand for the precious metal, as well.

In the U.S., the demand for the precious metal is exuberant. Consider the table below of gold coins sold at the U.S. Mint in the first seven months of this year compared to the same period a year ago. 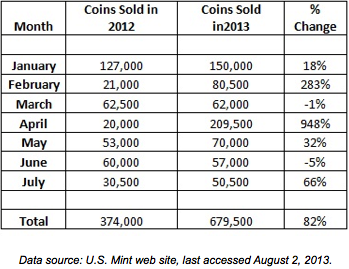 The U.S. Mint has sold 82% more coins in the first seven months of this year compared to the same period of 2012, suggesting very strong demand for gold bullion. This demand is contrary to what bears might say about the future of the precious metal.

Looking at the data, especially the demand, I can’t help but be bullish on gold prices. I see the April pullback (which was more like a massive correction) in the precious metal’s price as an opportunity.

But a bigger development in the gold bullion story, something few analysts are covering, is the decline in supply. As gold prices fell late this spring, companies with higher production costs closed mines and slashed exploration budgets. Hence, we now have a situation where demand remains strong and supply is declining for the precious metal—the ultimate scenario on which to build the next leg of gold’s price advancement.

Is it time to buy Emerging Markets again?