Why November May Not Be So Safe for Investors

Where are they heading next?

Looking from a historical point of view, from 1970 to 2012, key stock indices aren’t as volatile for November when compared to September and October. For example, the average return on the S&P 500 for the month has been 0.95%; the highest return achieved in the time period examined was 8.9% and the lowest return was -11.38%. If we take out the highest and lowest returns, the average return on the S&P 500 for November increases to 1.06%. (Source: “Historical Price Data,” StockCharts.com, last accessed November 1, 2013.)

Investors have to keep in mind that the above statistics are just that: statistics. They should provide only a general idea about what to expect from a historic point of view. They need to be informed about the fundamentals of key stock indices as well. The stock markets are forward-looking animals, and past information actually may not matter.

Here’s what investors also need to know on the fundamental side. 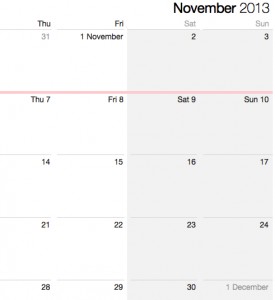 Companies on the key stock indices have developed a dangerous trend; their corporate earnings are coming in line with expectations, but their revenues have been below estimates. For example, as of November 1, 366 companies on the S&P 500 have reported their corporate earnings and 74% of them beat the earnings estimates. However, only 53% of them were able to beat revenue expectations. (Source: “Earnings Insight,” FactSet web site, November 1, 2013.)

But the misery about the corporate earnings of companies on key stock indices doesn’t end there; they are already warning about their earnings for the fourth quarter.

Sixty-six S&P 500 companies have issued negative guidance about their fourth-quarter corporate earnings, compared to 13 that provided positive guidance. If these numbers remain the same, it would mean that more than 83% of companies on the S&P 500 that have issued their corporate earnings outlook expect earnings to be negative. That said, note that it’s too early in the quarter, and we will most likely see this number increase.

Considering all this, investors have to tread the waters carefully. Key stock indices have increased significantly and may be a little off from reality. November isn’t very volatile for key stock indices, but things can change very quickly. Investors have to keep in mind that thanks to the high frequency trading, crashes happen in a matter of minutes, rather than hours. If investors have some profits on the table, they should consider taking them off, building a cash position, and waiting for the next buying opportunity.

This article Why November May Not Be So Safe for Investors by Mohammad Zulfiqar, BA was originally published at Daily Gains Letter

Leaping the Leadership Chasm – how to protect your reputation and value