Why Silver Prices Will Double from Here

As gold bullion prices declined in the period from April to June of this year, so didÂ silverÂ prices. And just like gold bullion, the bullish case for the white metal’s prices continues to build.

Demand for the white precious metal is not just robust; it is rising. The chart below compares sales of silver coins at the U.S. Mint in the months of January to July of 2012 and 2013.

The demand for the precious metal is strong, having risen by 50% in the first seven months of this year compared to the same period a year ago. 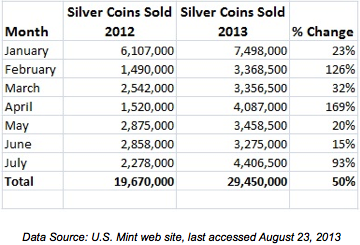 Looking at the technical picture, the chart below clearly shows the bottom in silver prices and the new upward-moving price trend.

Yes, prices for the white precious metal are down for the year, but after breaking below $19.00 an ounce, they quickly recovered and found support, as shown in the chart above. Unlike gold, silver prices tested the same support level ($19.00 an ounce) on several occasions, and they always bounced above that level whenever it was tested.

Have silver prices hit a bottom? Price manipulation aside, fundamental demand and technical analysis both make a good case for higher prices ahead.

My loyalÂ Profit ConfidentialÂ readers know I am bullish on gold bullion. I think the yellow metal will increase in value and move past its record 2011 high of just above $1,900 an ounce. When it comes to silver prices, I expect price gains from this metal to do much better in percentage terms.

I see an opportunity for investors in the major mining stocks. Just like gold stocks, after the recent correction in precious metal prices, the senior silver miners saw their stock prices fall to lows not seen in years. And while the stock prices of the major mining companies have come back a little, there is plenty of value still left in this sector—especially for those producers who are able to take the white precious metal out of the ground at a low price. 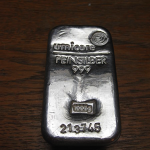 But this is just the monthly difference in real wages. I tend to look at the bigger picture.

In the midst of all the false optimism about economic growth, one question is going unasked. The Social Security Administration reports that in 2011, 66.6% of wage earners in the U.S. economy had a net compensation of less than or equal to $41, 211.36, adjusted for price change. (Source: Social Security Administration web site, last accessed August 23, 2013.) This means that two-thirds of Americans earn less than the country’s stated median income.

Wages are the very basic phenomenon that drive consumer spending. So the question that’s going unasked is: can the U.S. economy really see economic growth when wages are declining? My answer: of course not.

The illusion of economic growth created by the stock market is just that: an illusion. If the U.S. economy was indeed witnessing economic growth, real wages would reflect this. Unfortunately, the decline in real wages will simply lead to a pullback in consumer spending in the U.S. economy—something many major retailers are already complaining about.

“Even the most novice investor can now read the chart of the Dow Jones U.S. Home Construction Index and see that it is trading at its lowest level in five years. If, like me, you believe that stocks are an indication of what lies ahead, this important index is telling us housing prices are headed to 2002 levels! What would that do to the economy? Such an event would devastate the U.S.” Michael Lombardi inÂ Profit Confidential, December 4, 2007. That devastation started happening in the first quarter of 2008.

See our other Widgets HERE