Over the last few days, gold bullion in U.S. dollars has been under selling pressure yet again. With the price of gold bullion pulling back, one obvious question arises: what’s the appropriate investment strategy at this point?

Many are pointing to talk that the Federal Reserve is about to reduce its monetary stimulus, and this has led some investors to adjust their investment strategy by reducing their gold bullion holdings.

There are several interesting points to make about the argument for this investment strategy. Firstly, members of the Federal Reserve, along with other central bankers around the world, have explicitly stated that inflation is far too low—the opposite of what these investors who are bearish on gold believe.

Considering that the Federal Reserve has all the control in terms of money supply and it is adamant in its goal of increasing inflation, I certainly wouldn’t want to fight the Fed.

So, the media is stating that the reason people are shifting their investments strategy on gold bullion is because the Federal Reserve is about to begin reducing money printing due to the increase in inflation…

Since when does higher inflation lead to lower gold bullion prices? It just doesn’t. If inflation gets out of control, I would rather already own gold bullion than join the crowd scrambling to jump on board again.

If anything, having the Federal Reserve and global central bankers pushing their foot on the money printing accelerator just means a greater increase in the probability of inflation.

Inflation, of course, means higher asset prices. As an investment strategy, when an economy is encountering inflation, the one place you can’t be is in cash.

While the stock market has clearly benefited from the money printing, I believe the next leg-up is an increase in the price of gold bullion. With the Federal Reserve clearly unhappy with the low level of inflation, it has stated that monetary stimulus won’t stop until inflation starts to accelerate. 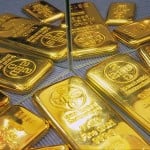 The second point is that the Federal Reserve is not about to tighten monetary policy; rather, the Fed is discussing reducing the most aggressive monetary policy in its history. There’s a huge difference between tightening monetary policy and continuing it at a reduced pace.

While the Federal Reserve might lower its buying from close to $1.0 trillion in asset-backed securities per year to perhaps only $600 billion, this is still a ridiculous sum of money.

The last point regarding gold bullion is the investment strategy shift by the mining companies themselves. At the end of the day, supply and demand is extremely important for the price of gold bullion.

Mining companies have begun reducing expansion, cutting back on projects and focusing on the most lucrative assets. This means that over the next few years, there will be a far less supply of gold bullion coming onto the market.

Over the short term, the market can move all over the place. But looking at the fundamental drivers of gold bullion, in my opinion, I think incorporating some precious metals at current price levels as part of a long-term, diversified investment strategy definitely makes sense.

This article Why the Sell-Off in Gold Bullion Is Based on Faulty Logic by Sasha Cekerevac, BA was originally published at Investment Contrarians

Small Businesses Are Expanding in Spite of Bank Lending Practices