Every day it seems as though the S&P 500 makes a new high. This strong performance over the past year is creating complacency, as more retail investors are piling into the market.

However, I would certainly urge caution, especially for any new capital being put to work at these lofty levels. With earnings season upon us, we’ve already seen several sectors in the S&P 500 get hit significantly, especially retail stocks.

We keep hearing about resilience among Americans, but consumer sentiment is not as strong as many analysts believe. This is why I wasn’t surprised when retailers disappointed.

One of the common arguments I hear about the S&P 500 is that the market is not expensive historically. I disagree with this argument, and add that the underlying fundamental strength of the U.S. economy, built on consumer sentiment, is far weaker than most people believe.

Regarding the valuation level of the overall stock market, best represented by the S&P 500, an interesting data point comes from Professor Robert Shiller of Yale University, whose research shows that U.S. stocks currently trade at a 25.4 multiple of the cyclically adjusted price-to-earnings ratio—far above the historical average. (Source: The Economist, January 4, 2014.)

Now, it would make sense for investors to pay a premium for S&P 500 companies if the economy and consumer sentiment were accelerating, But this is not the case.

Profit growth by the S&P 500 companies is decelerating. For the third quarter, total profits by corporations in America were $39.2 billion, down from a $66.8-billion increase in corporate profits during the second quarter. (Source: Ibid.)

Not only are companies within the S&P 500 experiencing a deceleration in corporate profits, but revenues remain stagnant or are declining in some sectors, and consumer sentiment appears to be trailing off, as well.

The preliminary Thomson Reuters/University of Michigan index of consumer sentiment fell from 82.5 in December to 80.4 in January. Most economists believed the January number would be 83.5. (Source: Bloomberg, January 17, 2014.)

This 20-year chart shows the S&P 500 and the University of Michigan index of consumer sentiment (solid line).

The S&P 500 is currently far above its previous peaks, yet consumer sentiment has not even reached the peak of 2013, let alone levels reached last decade. 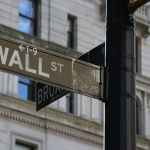 In fact, when you consider where consumer sentiment was in the mid-90s, I think it really speaks to how the average American felt during that decade versus the last few years.

I don’t believe that, with stagnant consumer sentiment, flat or declining corporate revenues, and decelerating corporate profits, the S&P 500 can continue rising at the pace we have been witnessing for much longer.

I’ve repeatedly stated that much of the increase over the past couple of years has been primarily related to the Federal Reserve’s monetary policy actions. We are now at a turning point, and the Fed is beginning to pull back.

I believe we are setting up for a very volatile 2014, as changes in monetary policy will create re-pricing (a sell-off) of the S&P 500.

One way to help protect your portfolio is to invest a small amount in a hedge vehicle, such as an inverse exchange-traded fund (ETF). The ProShares UltraShort S&P 500 (NYSEArca/SDS) is one such ETF, which moves up in value as the S&P 500 moves down, although it is better for shorter periods.

Can the party continue?

If the Fed continues printing money, this might occur for some time, but the party will eventually end unless fundamentals improve. Unfortunately, I don’t see any sign that this is happening.

This article Why This Chart Should Worry Investors by Sasha Cekerevac, BA was originally published at Daily Gains letter.

UK regulatory bodies have fined firms over Â£1billion since 2007