Yesterday’s appearance in front of the Treasury Committee came after a difficult period for Paul Tucker, one of the leading candidates to be the next Governor of the Bank of England. Tucker has spent most of his BoE career flying under the media radar – despite joining the Monetary Policy Committee in 2002, he averaged only two speeches a year until 2007. When you compare that with Andy Haldane, the current shining star at the BoE who managed eight in 2011 alone, Tucker’s contribution has been rather less intellectually innovative and rigorous. During his time as an executive director, perhaps his biggest media splash was when he gazumped some buyers after accepting their offer for his house.

At his core, Tucker is not on a par with Mervyn King or Haldane. He is a markets man – someone who enjoys being close to the cut and thrust of financial dealings, and the sometimes esoteric goings-on that baffle most ordinary people. He is not an economist – by some accounts he struggles with some of the technical aspects of forecasting inflation and modelling economic responses to interest rate changes, and his past speeches on monetary policy have been pretty dull and uninspiring. Perhaps this is not entirely a bad thing – but nor is he a central banker in the mould of Lord George, Mervyn’s predecessor, who was far more of an all-rounder than Tucker is.

His manner and style are also very different. At the Treasury Committee yesterday, he looked and sounded uncertain, evasive and – frankly – dodgy. Perhaps the most infamous part of Bob Diamond’s note of his phone call with Tucker was the ‘that would be worse’ phrase, a comment by Tucker in response to Diamond’s suggestion that he tell Whitehall that other banks were fiddling their Libor submissions. Tucker’s alternative recollection yesterday was a garbled, technical mess. No one really talks like the answer he gave. Similarly, his other appearances before the committee and at BoE press conferences have lacked the polish other speakers clearly have. Several contacts of mine have seen Tucker in action behind closed doors, and cannot understand why the driven, focused manner he displays there does not translate into public settings. But, fundamentally, he does not have Haldane's nor Adair Turner’s ease of communicating effectively.

I also have serious concerns about his testimony yesterday. While Mervyn King shaped the BoE’s monetary policy unit in his own image, Tucker had similar free rein with the markets division. Recent reports about him acting as a ‘spymaster’ and only selectively passing on important information to his superiors corroborate other accounts of his management style. Worse, this is a man who was closer to financial markets than anyone else at the BoE, and who prided himself on being so. The idea that he did not spot the unusual pattern in Libor submissions, regardless of whether he had formal responsibility for it, is scary. It suggests that either he is not telling the whole truth; or, worse, that he was incompetent.

However, even leaving behind concerns about what he really did know or suspect, or how he handled and shared that information, for me recent events have clearly demonstrated that Tucker is not up to the job of BoE Governor. His communication is not polished and clear enough. His grasp of economics is somewhat tenuous. And where he does have genuine expertise, he failed to spot or act upon a series of scandals that have rocked financial markets. I worry that bankers champion Tucker’s candidacy for Governor precisely because they think he is ‘one of them’.

Added to all of this is the perception that the Old Lady of Threadneedle Street, unlike the Treasury and the FSA, is unwilling to admit her mistakes and change. She was only pushed into very limited internal inquiries after sustained media and political pressure – instead, the BoE should have been at the forefront of reviewing what went wrong. With all the new powers that the BoE and the Governor in particular will have, that kind of attitude will simply not do. The need for the Old Lady to reform and change is paramount. But this also implies that an outsider is required to change the culture from the top down, rather than someone who has spent more than twenty years as an insider. In some ways, Tucker’s flawed performance and obvious shortcomings might even be a good thing, if they mean that a fresh leader really gets to grips with sorting out the BoE. 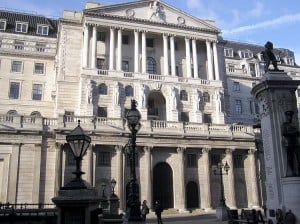 Bank of England by Adrian Pingstone

Why lower unemployment is bad news