Why Ukraine's Next President Doesn't Matter

Having ridden roughshod over Ukraine, Russia's annexation of the Crimea is now over and a new chapter in Ukrainian politics is about to begin—but it won't be much different than the last chapter, with the same old faces surfacing for May presidential elections.

In the aftermath of the Maidan protests that overthrew president Viktor Yanukovych in February and Russia's retaliatory annexation of the Crimea in March, Ukraine has moved presidential elections forward a year to 25 May.

According to a survey conducted between 14 and 19 March, Poroshenko was polling with a significant lead of 24.9%, leaving Klitschko and Tymoshenko battling it out for second place with 8.9% and 8.2%, respectively, and Tihipko trailing slightly with 7.3%.

What the polls indicate is that Poroshenko is likely to make it to a second round of elections, which are expected to take place sometime around late June, while he would be running against Klitschko, Tymoshenko or Tihipko, who are each polling more or less equally.

But the situation is dynamic. Late on Wednesday, Oilprice.com sources in Kiev close to former energy and vice-prime minister Yury Boyko said he had officially placed himself in the running for president, as an independent candidate.

Regardless of who wins the presidential vote, the Maidan will be disappointed. The protest movement wasn't just complaining about the Yanukovych government—it was complaining about over two decades of pervasive corruption, and now we are seeing those same faces again.

All of the top five candidates carry with them baggage from previous failed governments, but none more than Tymoshenko.

Of the four, Poroshenko and Klitschko have the cleanest records, and the least amount of negative political baggage. 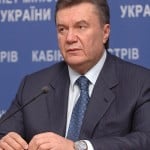 "Tymoshenko is not a trusted political figure, and there have been quite a few polls stating such," Ukraine energy expert Robert Bensh told Oilprice.com.

Tymoshenko spent three years in jail on what her supporters say were politically motivated charges of abuse of power before being freed last month; but her return to the political fray is a highly controversial one (news.yahoo.com/controversy-over-ukraines-tymoshenko-wipe-russians-leak-164225091.html).

"She polls right in with current and/or former members of government. And the reason is that the rumors about her wealth and how she acquired her wealth are still quite prevalent and she is still very much viewed as a member of the failed government of Viktor Yushchenko. Indirectly, and with some success, people have been tying her to one of the reasons we're having so many problems today. The Orange Revolution was a failure. We have the gas deal with Russia which she signed with Yury Prodan, the current acting energy minister," said Bensh, who has been leading oil and gas companies in Ukraine for nearly a decade and a half.

Tymoshenko's time has passed—a sentiment Bensh said was made clear when she was released from prison and joined the Maidan protests. "The reception she received was quite cool. It was a polite reception; not the roaring of the crowd that she was used to."

At the same time, Bensh says, while Tihipko's chances are more remote because of his ties to the former ruling Party of Regions, he may surprise us because he is the only one who has carved out a singular voice among the four.

Poroshenko, Klitschko and Tymoshenko are all going after the same voters, while Tihipko has to appeal to the industrial regions and to the Russian-speaking population with a pro-industry and pro-business platform.

"The other three candidates will come out with muddled messages," Bensh said. "I don't think they know what to be. Are they pro-Ukraine, pro-EU? Are they anti-Russian while at the same time being careful about the Russian message? For a political consultant, Tihipko and Boyko are certainly the most interesting candidates. Tihipko is a successful former national bank president, and Boyko an energy expert whose politics are less polarizing. Both would recognize the country's development potential."

With Boyko entering the fray, Tihipko's chances are reduced because they will be competing for the same votes.

But for Boyko, too, it will be challenging to overcome the stigma of ties to the former government. "He has to show how and why he should be trusted," Bensh said.

Bensh cautions against attributing too much significance to Ukraine's presidential elections.

In response to the Yanukovych government and the Maidan protests, Ukraine has returned to its 2004 Constitution, which means that power will rest with the prime minister and the parliament. A new president will choose a prime minister, which must then be approved by the parliament. According to Bensh, the general belief is that once a new president takes office in July, there will be a call for parliamentary elections later in the fall, though nothing has yet been mandated.

"At the end of the day, the best person for Ukraine is a 35-year-old who isn't running for president—who isn't part of the system yet and hasn't been involved in over 20 years of poor political leadership and corruption. We're a generation away—hopefully—from a true leader who can turn Ukraine into a strong, independent country that sits between Russia and Europe," Bensh said.

From a business standpoint, the economic and political situation will not show signs of stability until next year. At the same time, the intuitive investor may see opportunity ripening.

"For the contrarians out there, this is the time you should start jumping in. The situation is stabilizing, the currency risk is beginning to minimize. From an economic standpoint if you're going to get into Ukraine and do something inexpensively, now is the time to come in. You've got nine months before it stabilizes, and at that point, the whole world is showing up," Bensh said.

By. James Stafford of Oilprice.com

USD selling continues but the jury is still out