Why you should buy property in Dubai

Dubai has become increasingly popular among foreign property buyers since 2002, when the government passed a law stating that non-nationals were allowed to own property there. It is now at the centre of the international real estate market, due to the city having high living standards, the weather and its expansive development projects.

If you’re unsure of whether to make a move over to Dubai, this article should hopefully help you make your decision easier. You’ll be joining a community of expatriates who have settled in quite comfortably. As a foreigner, getting a personal loan in Dubai is now easier than before, if money is an issue.

A loan calculator will help you figure out the currency differences.

Dubai is where it’s at

Living standards in Dubai are very high, which is why it’s become so popular with foreigners in the last ten years. It’s simply quite a luxurious city, and the abundance of international schools, jobs and the ease at which foreigners can integrate here have seen its popularity soar.

The government has been keen to satisfy the needs of the expat population, which has continued to grow. There is an increased demand for residential as well as commercial properties because of this, with staggering property developments springing up around the city.

Investment in Dubai is full of profit potential

People have found that their investments have been soundly rewarded in Dubai: it’s simply a great environment for buying property – commercial or residential. The market has done so well in particular because of the freedom given to developers by the government. The range of property types across Dubai is quite large.

There are high-rise apartments, beach villas and standard properties too, all at affordable prices in comparison to Western, developed countries.

Dubai has recovered from the financial crisis

While other countries are still floundering as a result of the financial crisis, Dubai is one of the few places that can claim to have made actual, stable recovery. 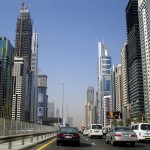 While the UK is only expected to recover gradually over the next few years, Dubai has already managed to get back on track, with its residential market recovering too.

One reason for this is the forward-thinking measures taken by the government. They have recently introduced the Draft Investor Protection Law, which states that an investor may cancel the contract if the developer has failed to deliver on promised facilities and services onsite.

Dubai is a great place to live

With year-round sub-tropical weather, great entertainment, low crime, low taxes and the overall ease of foreigners in integrating and purchasing real estate, making a decision to purchase property in Dubai is an extremely attractive option.

The easiest way to invest