The provision of services to treat an increasingly common sleep disorder linked to serious ill health varies widely across the UK and does not match current need, indicates research published online in Thorax.

Furthermore, demand is set to rise as the population’s age and girth increase, both of which are risk factors for the disorder, known as obstructive sleep apnoea or OSA for short.

OSA is a condition that disrupts breathing during sleep, usually as a result of the relaxation of the muscles and soft tissues in the throat which relax and collapse to block the airway for 10 or more seconds. It affects an estimated 4% of middle aged men and 2% of middle aged women, and is associated with obesity and increasing age. But it is thought that 80% of cases remain undiagnosed.

Because OSA disrupts breathing during sleep, it usually interferes with the quality and length of sleep as well, leading to daytime sleepiness and the risk of accidents as well as other health problems associated with poor quality sleep.

The researchers used British Lung Foundation data, to identify the location of sleep disorder centres in all four UK countries.

To uncover hotspots with the highest predicted rates of OSA, they used prevalence data for the five most common factors associated with OSA – obesity, type 2 diabetes, older age, high blood pressure, and gender – in the populations served by 239 different NHS administrative areas in all four UK countries.

They then mapped the predicted prevalence rates of OSA onto the location of sleep disorder centres and found “a concerning mismatch” between them.

The number of sleep centres across the UK totalled 289, only 50 of which offered full diagnostic assessment of sleep problems (polysomnography), equivalent to one centre for every 1.25 million citizens – a ratio that is around 10 times higher than in the USA.

And these centres were not evenly distributed either. For example, 66 of the 213 clinical commissioning group areas in England had no sleep centre at all, yet there were nine in one large conurbation. 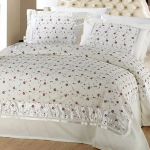 Bed by Raanansk via Wikimedia Commons

The evidence shows that the number of diagnostic sleep studies per 1000 of the population varies 60-fold across the UK – the highest variation of any branch of respiratory healthcare, the study authors point out.

“[This] is a reflection of both a low rate of symptom recognition and referral from primary care, and a lack of services to which patients can be referred,” they write.

“Sleep medicine is still evolving, and despite an increasingly obese an ageing population with an intensifying likelihood of developing [other conditions] at the same time such as diabetes and [high blood pressure], the UK’s need for a nationwide delivery strategy for sleep service provision has not been adequately addressed,” they add.

“The current provision of sleep services in the UK does not meet the healthcare requirements of the population and varies remarkably,” they conclude.