Will EV and Hybrid Cars Really Save the Planet?

Does the planet really need saving?

Recent news on the global issues have opened up the car debate once more and whether the alternatives to petrol and diesel fuels are any more ecologically sound in reality. Scientists at the UN climate panel are arguing that climate change is still happening and it is still human behaviour that is causing it. While the head of the panel, Professor Pachauri, insists that warming has not slowed, others are arguing that Co2 levels have not risen as steeply as predicted. Have the forecasting computers overestimated, or is something else going on? As ever the scientists are still struggling to give definitive answers to the slew of questions that stream from this debate. One thing remains clear though – the planet is being affected by climate change and we must look to alternatives to traditional fuels in an attempt to try and lower our impact on it.

According to recent reports, electric cars are actually being suggested to be dirtier from an environmental viewpoint than their petrol or diesel peers. Unclean at Any Speed is arguing that despite the money that has been ploughed into the development of these eco cars through Government subsidies, the manufacture of them requires high energy-intensive methods. Many experts have argued that when this is combined with the life cycle and disposal of the batteries that they use, any environmental benefits are lost. Other problems are seen at manufacturing level, such as the rare metals used to create magnets in the motors and the lightweight materials used for the batteries, like aluminium and carbon that require heavy processing techniques. Zinc, copper and lithium, also used in the batteries, are extracted from the earth in harmful and incredibly energy-intensive ways. With further studies backed by Congress in the US also reaching similar conclusions, experts are recommending that subsidies being ploughed into EV cars should be shifted to other environmental initiatives such as smog reduction plans, bicycle infrastructure and emissions testing.

In response to this, Renault has recently run a set of tests comparing their Fluence sedan in its electric version against its petrol and diesel models. Providing a life cycle assessment, including emissions from the car, from the process of making it and total energy demand in manufacturing, they strongly argue in favour of the case for the electric model. The results found that while the EV may have a greater environmental impact during manufacture, once the cars are being used, their petrol and diesel peers make a far greater impact in their use of fuels. These results factored in that the EV would be using electricity from a Grid that uses high levels of fossil fuels. However some argue that in fact the best solution at this time is the hybrid car.

Are the hybrids currently the best environmental answer?

There are now around 12 hybrid cars on offer and several new models set to launch in the near future – so what are they and how do they offer an ecological solution to car ownership? Hybrids have been around for a number of years now and are considered by many to be conventional technology – the next launches in the Hybrid arena is the diesel hybrid. 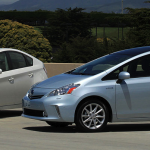 In practice a hybrid improves overall fuel economy by around 20-25% and reduces the emissions – they are particularly good in the start-stop environment of city driving, and some also offer a zero emission option for short distances where they use solely electric power. Their main failing is at longer distances where they struggle to offer competitively strong environmental benefits.

Technological developments in the Hybrid world are currently centred on creating a plug in hybrid, with Toyota offering a plug in Prius and Vauxhall launching the Ampera – essentially these are hybrid cars with a larger capacity battery and a mains plug. But will this actually just lead to the Hybrid versions becoming less environmentally sound as they morph into more of an EV car?

The debate surrounding electric, hybrid and traditionally fuelled cars is a complicated one. Cars that appear outwardly to be the least green (those fuelled by diesel and petrol) could in fact not be so bad – while the models that tout themselves as the answer to our eco prayers can actually be just as damaging to the environment. Is it purely a case that the environmental damage in these green solutions simply happens further away from the car? Only time will tell.

By Louis Rix from Car Finance 247