Britain's oldest real life William Shakespeare has today launched a campaign to get the world's most famous playwright officially recognised in the British calendar.

The 91 year old, from Bristol, was joined by Stratford-upon-Avon MP Nadhim Zahawi as he became the first person to sign a petition to recognise 23 April as national William Shakespeare Day.

The duo launched the campaign at Gatwick Airport by unveiling a special edition easyJet plane with an image of William Shakespeare on the fuselage. The airline is backing the bid to get the Bard recognised and is helping to garner the 100,000 signatures necessary for the issue to be debated in parliament.

Heritage and culture remain one of the key drivers of tourism to the UK (Visit Britain report) and easyJet has arranged a programme of free Shakespearean performances at airports across the country to share the playwright's most famous work. The airline's special William Shakespeare plane will also operate on flights across easyJet's network this summer to help promote the UK as one of Europe's leading cultural hot spots. The campaign for national William Shakespeare Day will culminate on the 450th anniversary of the Bard's birth this 23rd April. 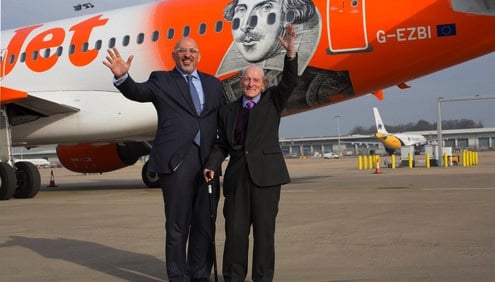 "It is such an honour to be chosen to launch this campaign to recognise my namesake. All my life I have been proud to share my name with such an iconic British figure and I think it is important we recognise his achievements with an official day in the calendar."

"We know what we are, but know not what we may be.' – "That's for sure. And it is, of course Shakespeare who said pretty much everything that needs to be said. I fully support the campaign for a National Shakespeare Day – we should all be in the habit of celebrating his place at the heart of what it means to be human!"

"William Shakespeare is Britain's most famous author so easyJet is proud to back the bid to make 23 April his national day. We are asking our UK passengers to sign the petition while suggesting to those from the rest of Europe that they visit the land of Shakespeare to learn more about him and see his works performed.

"Our campaign will run during April in our in-flight magazine read by 5 million passengers a month, across thousands of seat back adverts and we will be staging free Shakespearean performances at airports across the UK. Passengers can win free flights by writing a sonnet supporting the campaign and it will be launched with our special Airbus which will carry Shakespeare's image on the side. Aviation and Shakespearean language combine for the name "Romeo Alpha Juliet."

"Is it a Bard, is it a plane? William Shakespeare is one of Britain's greatest gifts to the world, 'he was not of an age, but for all time', and I have long argued this sceptre'd isle should celebrate April 23 as a national holiday. I'm delighted that easyJet have chosen to campaign on this issue – let's hope we can get it off the runway."

easyJet will be collecting signatures and offering free Shakespeare performances at the following airports this month:

Faith Hines, who has coordinated the Shakespeare Day Campaign said:

"As Ben Jonson said, Shakespeare 'was not of an age but for all time'. Sign the online petition to ensure that we have a Shakespeare Day every year."

"As a leading literary publisher and publisher of the Arden Shakespeare, Bloomsbury supports this campaign to celebrate a writer whose influence and inspiration is seen on page and on stage around the world."

For more information about the campaign and to add your support please visit: www.easyJet.com/ShakespeareDay.

Full Casting Announced for Midsummer Night's Dreaming at the RSC