It is thought that the Chancellor will scrap or delay plans to increase air passenger duty in Wednesday's budget so taking pressure off of holiday-making families and presumably travelling business people too.

This could, says the Chancellor, save families up to Â£40 when they fly off on a holiday. But one suspects the green lobby will not be as happy as the holiday goers at this attempt to keep the airlines busy.

It is also hoped that he will take the pressure off of the hard pressed road user by postponing the expected 5p rise in fuel duty, which would then take more tax as VAT is applied to the fuel duty (a tax on tax). There may also be the chance of a form of 'fuel duty stabiliser', which would keep the price of fuel steady by altering the tax taken as the price of oil goes up and down.

According to the Telegraph the coalition government are also investigating whether or not to amalgamate income tax and national insurance contributions into one simpler system. This would make the tax take far more transparent as, although income tax is fairly straightforward, NI contribution levels can be confusing to some. 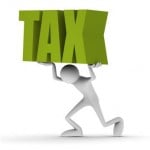 Now, if the income tax rates are changed across the board we will end up with a perverse situation where pensioners are suddenly hit with a 60% tax hike. So one assumes that there may well be different rates or allowances for those that draw the state pension.

This move may throw up some anomalies but at least it will be a move toward a simpler more understandable and transparent tax system.