With fighting still ongoing in Libya, global events took a further damaging turn in the past week with the earthquake, tsunami and subsequent nuclear issues in Japan. The devastation from one of the largest quakes ever recorded is indescribable, with entire communities devastated. Faced with such widespread carnage, even the third-richest economy in the world is struggling to get relief supplies where they are needed.

Perhaps to escape the sheer horror that the images and stories convey, City types are already talking about the eventual financial cost of the crisis. The damage could cost insurers more than $60bn, according to some estimates, while others worry about the damage to the Japanese economy.

We will certainly see the impact of the disaster in the GDP data – with many factories and companies now closed in light of the ongoing battle to stabilise nuclear reactors, business as usual is simply not an option. Japan’s national income will take a big hit, although the cost in human terms will be far higher than accountants and statisticians alone will pick up, even if GDP falls by 5% or more. In terms of the longer-term implications, there are two aspects that I will touch on briefly.

The first is that, in order to fund its response to the crisis, the Japanese Government is likely to issue more debt. The Japanese Government Bond (JGB) market is already one of the deepest in the world, albeit highly concentrated – more than 90% of JGBs are held domestically. That home bias has enabled Japan to issue vast quantities of paper while yields have yet to really respond – even before the crisis, the IMF estimated that Japan’s gross government debt exceeded 200% of GDP in 2009, and will reach 234% of GDP this year. To put this into context, Greece’s debt stock was forecast to reach 140% of GDP this year, and the UK 82%. But despite this high debt ratio, 10Y JGB yields were trading at just 1.3% at the end of February, versus 11.8% for Greece and 3.6% for the UK.

Of course, this low JGB yield reflects factors other than just the absolute size of the debt stock, not least the aforementioned home bias and the long-term prognosis for Japanese growth, which is hardly spectacular. But the impact of the crisis could start to push bond yields higher. Standard & Poor’s downgraded Japan’s credit rating to AA- on 27 January, and Moody’s began reviewing their rating, with a downgrade in mind, last month. If the cost of the crisis adds significantly to the debt burden, as it is very likely to, these ratings could come under further threat and yields could rise, in turn weighing on growth. 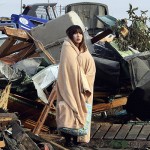 However, there are also good reasons to think that growth might be stronger than usual in the aftermath of the crisis. While the lives lost cannot be replaced, the wholesale destruction of the east coast’s infrastructure has also hit Japan’s stock of productive capital. The light at the end of the tunnel, in economic terms at least, is that this capital destruction is also likely to have raised the marginal product of capital, once rebuilding work gets underway. That implies somewhat stronger growth: the economic impact of building a second road alongside a first is far smaller than that of (re-)establishing roads and other communication links in the first place. Stronger growth will, in turn, make the debt burden more manageable. For sure, Japan will still have a debt stock to wrestle with, as it did before the crisis, but in the fullness of time the economic scars from the disaster should fade.

None of this is likely to provide any comfort to the families that are even now struggling to survive, let alone start rebuilding their lives. Faced with events such as these, we can sometimes emotionally retreat from the full horror of the devastation. And while economics can tell us about costs, risks, and the financial outlook, it offers no guide for how to respond to such human suffering.

Will the European Union reindex stock markets to 100 points?