In a bid to combat the scourge of the really poor across our planet, food price speculation, the World Development Movement has decided to employ the weapon of satire to get the message across.

To do this they have teamed up with writers Hoot Comedy and actor Rufus Stone (Holy Flying Circus) playing a rather ‘challenged’ George Osborne who is being guided by Vicki, his long-suffering adviser, in a series of internet videos the first of which aired yesterday (22nd November 2011).

The videos can be found at www.therealgeorgeosborne.com where you can do all the usual social things as well as send the Chancellor a message.

The aim of the videos is to raise awareness of the damage to the world’s poorest people that food price speculation does as well as putting pressure on the UK government finance minister to vote accordingly in the EU Council of Ministers meetings.

As the WDM points out, ‘Speculation is driving high food prices worldwide. High food costs have pushed the food bill for the average UK household up by Â£188 in the past year, and are forcing millions of people in developing countries into poverty and hunger.’ 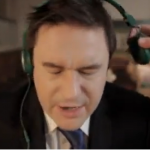 So this issue affects every ordinary person in the UK by pushing bills up, but when you are living on the equivalent of a couple of quid a day then even the smallest rise in prices, which helps line the pockets of speculators, takes food out of the mouths of the starving.

The WDM is a UK-based anti-poverty campaigning organisation that has a worldwide reputation for tackling hard-hitting, controversial issues.

It wants to see food price speculation properly regulated. The practice does have its place in stabilising prices for seller and buyer where delivery of the commodity is taken. Where middlemen speculate and try to rake a profit it just adds to the cost for everyone with no value added.

“With global food prices reaching record levels in 2011, the issue of excessive speculation on food is now firmly on the political agenda in Europe. Proposals for regulation were published by the European Commission last month and will be debated and discussed in the European Parliament and Council of Ministers over the coming months. However the financial industry, with the help of George Osborne and the UK Treasury, is lobbying hard against effective regulatory measures.

In the US, regulation of food speculation was included in the Dodd-Frank Wall Street Reform and Consumer Protection Act in 2010. Effective implementation is likely to be dependent upon the EU introducing similar regulation to ensure that Europe does not become a haven for under-regulated food speculation.”