Foreign Secretary, William Hague's recent comments on British businesses have shown how deeply out of touch this government is with the rest of the country.

The problem is William Hague is like many senior British politicians who have spent years working in governmental office whilst remaining isolated from the reality of running a business in a credit famine.

I am sure Mr Hague has business interests but he himself will not encounter the same problems as someone who does not have the same resume and connections in the highest of places.

But Hague's comments in the Daily Telegraph areÂ indicativeÂ of a political class that is not living in the same world as the rest of us.

Telling British businesses toÂ workÂ harder and stopÂ whining about the state of play is far from helpful when you consider the fact that many small and medium size business owners are having toÂ re-mortgageÂ their family homes and cut employees' working hours in order to keep afloat.

Working harder for many of these businesses is not possible, so his request for businesses to up the gear in order to create more jobs is clearly the rantings of a man who does not seem to understand the dynamics of running a business in this currentÂ economicÂ climate.

Either that orÂ wilfully ignoring the facts and just looking to spin a supposed lack of professionalism on the part of entrepreneurs as an excuse for the government's own inability to generate growth in the British economy.

Lets face it, the Queen's speech was anÂ embarrassment to the coalition, it gave no pointers or direction for businesses to followÂ and Hague's knee jerk reaction to the comments of Justin King, the chief executive of Sainsbury's, shines light on the chaos running at the heart of this government. 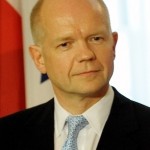 The token 6p cut in corporation tax is hardly going to get the credit markets lending to businesses and project Merlin has failed to pull a rabbit out of the hat.

So expecting a system which has, as Hague points out, become reliant on credit to function without credit is not going to happen overnight and the government needs toÂ implement more stringent and creative methods of Â stimulating growth and possibly divert funds away from foreign aid to developed counties in order to fund more progressive economic structures.

Over 16s and EU citizens to vote in EU referendum?