Looking back at the last week or so it’s probably a good job that the majority of our electricity is not derived from wind power.

Taking data from gridwatch.templar.co.uk, a site that shows an up to the minute (well almost) status of the UK National Grid, I constructed a graph of wind power taken up by the system over the last week (below).

You will see that it fluctuates quite a lot and seems to have been affected by the recent weather.

There is a very significant dip on Monday 10th February and another earlier this morning (14th February 2014).

One of the major variables here is where the storms hit. If they miss every wind turbine site then wind power fluctuations will not occur. But if they hit them all then there will be a massive drop in wind power available in a very short space of time.

Although this of course changes with demand, the 5000 MW level shown on the graph is (very) roughly ten percent of the total. On Monday it dropped down to 1000MW, a fall of about 80 percent in just a few hours.

Now, this can be countered by having Combined Cycle Gas Turbines (CCGT) ready to spin up to take up the slack of about four percent of total demand or spare coal or nuclear capacity. But what if our wind power was over fifty percent of the total? How could we keep our hospitals, schools, commerce and industry going with fluctuations of upwards of twenty percent unless we still had a huge amount of fossil fuel and nuclear power based generators instantly available?

As you can readily see from the graph, it is not the overall power during any day, month or year that is important, it is the amount of power available at any instant in time that is the crucial factor.

But now we have a problem, the climate change argument is that these weather events will become more severe and more frequent. As a result it will surely make wind turbines even less attractive as an option. To make this work we need some sort of smoothing capability such as batteries, but we may not yet be there technologically (as well as the problems and inefficiencies of AC to DC back to AC conversion).

As pointed out in http://www.goodenergy.co.uk/blog/2012/10/02/power-payments-the-full-picture, wind farms actually end up being the energy sources we switch on and off and it costs us to have them standing idle in the form of ‘constraint payments’. The bill just before Christmas can be seen here, all the while many homes went without electricity.

Now, constraint payments are not limited to the wind turbine industry. They also apply to other suppliers, so what’s the catch? Well, if we have to have huge reserves ready to take up from increased wind power capacity that fluctuates wildly then we will always be paying a large amount of constraint payments to either: the fossil fuel generators when wind turbines are turning, or to the wind turbine generators when they are stationary – i.e. we make these payments all the time and on a large scale.

Simply put, we could end up with a situation where the more wind turbines you have the more standby capacity you need. This leads to overall increased capacity, which in turn means more unusable (idle) capacity. The more idle capacity the more it costs in constraint payments because the plant has to be ready to go at a moments notice. And more idle capacity is just inefficient anyway.

Who picks up the increased tab? You do.

There is the HVDC Cross Channel connection whereby we could export energy to France but this is a 2000MW line so limited and we seem to be a one way import from them anyway (which must be costing in both purchase costs given to French suppliers and constraint payments to our own idle generators). 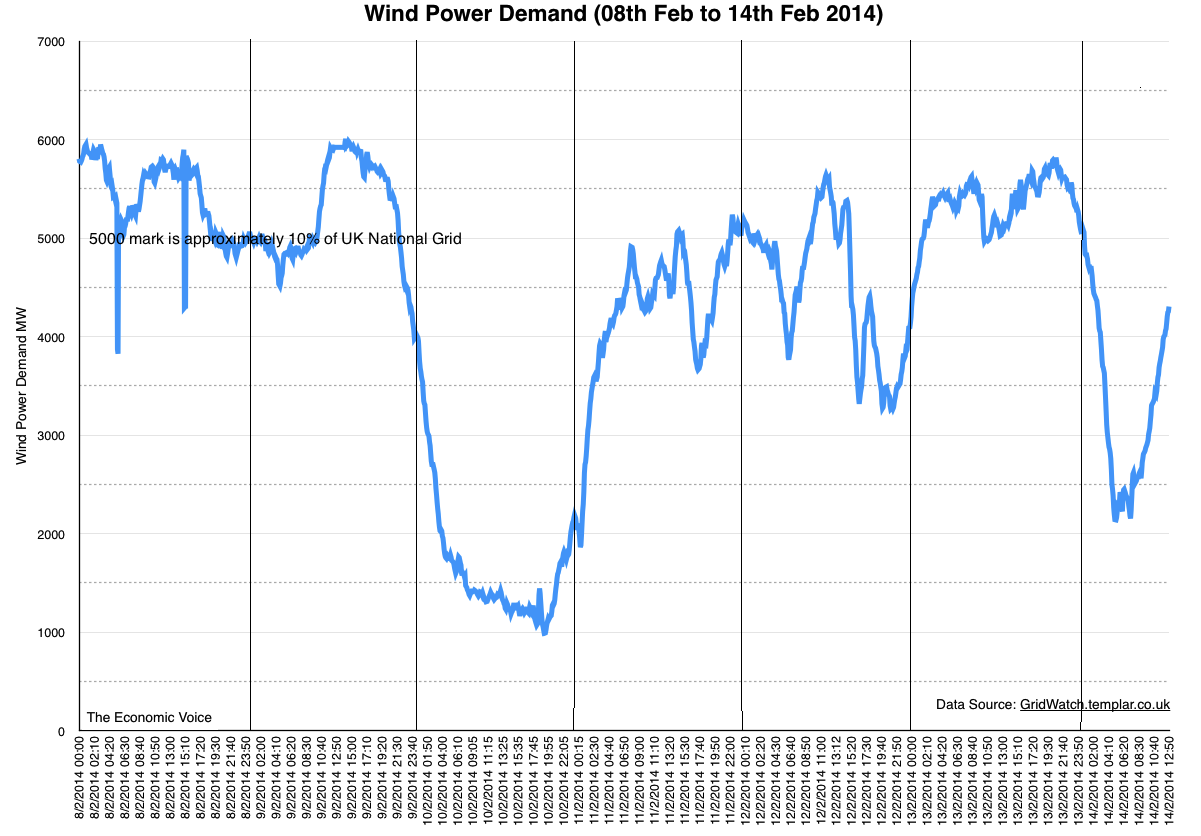