Wind Turbine Proposals To Be Seen By Communities First

Communities to be consulted on wind turbine proposals and siting

Communities will have a much greater say over wind turbine proposals and siting when early consultation between local people and developers becomes compulsory.

Many communities feel forced to consider wind farm and turbine plans they have had no part in shaping, and want early and open discussions with developers to influence proposals and to improve the outcome for their area.

Planning works best when people have the opportunity to influence decisions that affect their lives and when developers hear concerns early on, but many people feel cut out of the initial process of steering turbine development.

New measures, to be laid before Parliament shortly, will provide that developers seeking planning permission for onshore wind development involving more than 2 turbines or any turbine exceeding 15 metres height will need to consult the local community before submitting a formal planning application.

When a proposal meets the criteria, the developer will need to consult to ensure communities views about siting and other relevant planning issues can be heard first. The measure will come into force before the end of the year.

"We are making sure local people have a crystal clear voice in airing their opinions on wind turbines very early on. From day 1 communities should be centre stage in crafting plans that affect their lives instead of having them forced upon them. 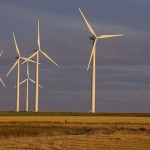 "Ensuring communities have a greater say at an early stage allows developers to consider much earlier whether to pursue a proposal and what changes they should consider before putting forward formal plans. Our changes allow people's views and other impacts to be taken into consideration much earlier."

"These new rules will help ensure that in future people have a say earlier on in the process over where onshore turbines are sited.

"Wind is an important part of the UK's energy mix, and both government and industry agree that these proposals will ensure that new turbines are appropriately sited."

The measures build on existing industry best practice that already takes place for most commercial scale applications, where early engagement is required, and complement the need for good local plan making.