Just as we are getting used to the concept of windfarms helping save the planet along comes a report saying that they cause local climate changes themselves.

The study, led by Liming Zhou, Research Associate Professor at the Department of Atmospheric and Environmental Sciences at the University of New York, is based on satellite data that showed that, over a ten year period, the temperature around a large Texas windfarm increased by 0.72C (1.37F) as more turbines were added to the farm.

This change in temperature could, it is thought, change local weather patterns as well as affecting wildlife in the area.

The action of the rotating blades mixes the cold air near the ground at night with warm air from above so pushing up the overall temperature in the area.

This does reinforce earlier research conducted in3010 but more research needs doing as more and more of these turbinbes are brought into operation – “These changes, if spatially large enough, may have noticeable impacts on local to regional weather and climate” says the extract here.

The strange thing is that we are in any way surprised. Whatever the human race does impacts on the planet in some way or another; all probably stemming from our use of fire.

We have cleared woodland, farmed animals and crops, used wildlife for target practice and detonated atom and hydrogen bombs. At each ‘advancement’ we have made our impacts on an even more grand and industrial scale.

What we must start to realise is that any large undertaking by us will inevitable have an effect on our Mother Earth. Even those undertakings that are made for ecological reasons. 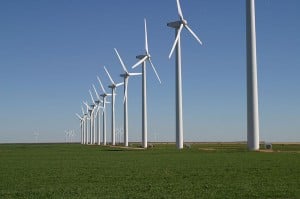 Image by Leaflet (Own work) [Public domain], via Wikimedia Commons