Exploring how the First World War changed the society we live in today, a new external photographic display at IWM North, part of Imperial War Museums, in Manchester, reveals images of women working in industry during the conflict.

As IWM builds towards a major programme of events and displays commemorating the First World War Centenary, six images by official First World War photographer G P Lewis are being unveiled in huge, 5 metre high frames, outside IWM North, on the Quays in Manchester.

George Parham Lewis, an official photographer of the home front, specialised in documenting heavy industry and photographed women workers in the glass, vehicle and food industries.

The images in the free IWM North display document women’s vital contribution to the war effort in factories across the North West of England almost 100 years ago.

Taken from IWM’s renowned Photographic Archive, the images were jointly commissioned by IWM and the Ministry of Information, demonstrating the wide range of roles performed by women during the First World War.

Visitors are invited to contact IWM North on Twitter @I_W_M #IWMNorth or Facebook.com/iwm.north if they recognise family members in any of GP Lewis’ photographs on display. 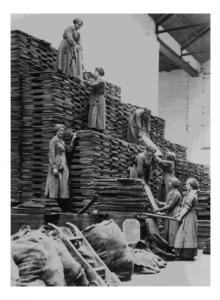 The Women and Industry display opens on 18 January, while IWM North’s major exhibition marking the centenary, From Street To Trench: A War that Shaped a Region, will open on 5 April. For more information, visit www.iwm.org.uk.

GP Lewis’ photographs depict the following scenes of woman and industry in the North West during the First World War:

♦ Women workers in an Oil and Cake factory having tea, Lancashire, 1918. Oil cakes were used to feed cattle

♦ Women working in an asbestos factory, Lancashire, 1918. Asbestos, now recognised as a dangerous material, was used in many different ways such as in buildings and enginesWomen workers operating a grain elevator at the mills of Messrs. Rank & Sons in Birkenhead, 1918