AIC publishes list of members with largest % exposure to Brazil

With the World Cup upon us, and the Olympic games in the not too distant future, Brazil is in the spotlight.

But with this country “still feeling the hangover from the commodity boom”, what is the outlook for the region?  And is the halo effect of the World Cup and Olympic games realistically going to have a positive impact on the economy – or are the elections in October far more significant?

The Association of Investment Companies (AIC) has published a list of member investment companies with significant holdings in Brazil, and collated some manager comments.

“In spite of Brazil still feeling the hangover from the commodity boom and growth seemingly unlikely to pick up in the next 12-18 months, investors should still consider buying Brazilian equities because they’re cheap. Whilst we do not view the World Cup and Olympic Games as important catalysts in terms of market timing, they certainly have longer-term positive implications for potential growth by raising investment and improving infrastructure. Companies that we believe will benefit from increased sales to tourists and increased international awareness include: Alpargatas (produces ‘Havaianas’ flip-flops), Ambev (beverage company), Mills (one of the largest specialized engineering services in Brazil) and Localiza Rent a Car.”

“As the world turns its attention to Brazil with the World Cup starting on June 12th, investors looking for opportunities in Brazilian equities will be more focused on another date – October 5th.  This year’s presidential elections will be key for Brazil’s economic directions – the market has reacted positively with opinion polls showing growing levels of disapproval with the current administration and growing voter interest in opposition candidates.  Low growth and inflation at the high end of the Central Bank’s band along with lower fiscal discipline has resulted in underperforming equities and expanding country risk premium during the current administration.  So while the World Cup should be exciting, the market is more focused on the October finals than on who will play in Maracanã on July 13th.”

"We see the World Cup adding little to the Brazilian economy over the long-term. The infrastructure spend on the tournament and the Olympic Games will only make up a fraction of the government’s overall infrastructure investment programme.

"In the short-run, some companies will benefit from the legacy, yet the bigger challenge facing Brazil is slowing growth and stubbornly high inflation. Ironically, an early World Cup exit for the home nation could add to the overall disillusionment facing the current government. President Rouseff’s government is already under pressure from the Brazilian people as public funds have been spent on hosting the games rather than invested in much needed housing, infrastructure and other social projects.

"However, for us as stock pickers, the state of the economy is of secondary importance; the most important thing is that businesses continue to be well run, generating strong cash flows that can be returned to shareholders. From this perspective Brazil is home to some good quality companies that have the potential to perform well over the long term." 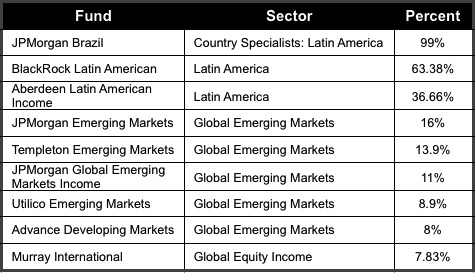