World Health Organisation says use of mobile phones may cause cancer

Although no clear link has been found, the International Agency for Research on Cancer (IARC), which is part of the World Health Organisation (WHO), has given the radiation emitted by mobile phones the third highest classification of ‘possibly carcinogenic’.

This puts their use below ‘carcinogenic to humans’ (smoking for example) and ‘probably carcinogenic’ (inhalation of diesel or creosote fumes amongst many other causes).

This is the result of a major review by 31 scientists from 14 countries studying hundreds of published reports into the effects of electromagnetic waves on the health of humans. Based on evidence in these studies the assessment was that there might be an increased risk of glioma (a malignant form of brain cancer) from intensive use of mobile phones.

The use of mobile phones has now been classified amongst over 900 other possibly carcinogenic agents where there is no direct identifiable link but there are suspicions or indirect evidence of some sort of link. 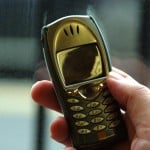 Use of Mobile Phones 'possibly carcinogenic'

A previous WHO report (IARC Interphone) had found that there was a 40% increased risk of brain tumours amongst those that used mobile phones the most, but it could not pinpoint any solid evidence.

The problem the researchers have is that mobile devices have been used widely only for a very short period in our history but it can take decades for tumours to develop. What they are trying to do is identify and quantify a risk that has yet to emerge in a physically measurable way.

Other agents in the ‘possibly carcinogenic’ category include low level magnetic fields, coffee, talcum powder, lead, DDT and chloroform as well as being a fire-fighter or working in a dry cleaners.

With as many as five billion phones in use around the world even a small risk could affect many people.