N -Dubz singer, Tulisa Contostavlos, has been involved in a heated argument that may have resulted in her PA being head butted.

I am afraid this is a bit of a vague one because theÂ reportsÂ coming in are a bit mixed but the story goes something like this.

Tulisa had an argument with a member of the public at a WH Smith shop in Glasgow airport for one of two reasons.

1. A member of the public said a nasty comment about Tulisa which drew her 26 year old PA, Â GarethÂ Varey, into an argument with a member of the public to stand up for his employer saying words to the affect of "Oi don't be nasty to her" possibly in much stronger terms with her PA Gareth receiving a Glaswegian kiss to the head in return.

2. Tulisa was very annoyed about a photo of her in a magazine and this caused her to have a foul mouthed outburst, which offended a member of the public who then informed Tulisa in strong words to watch her language to which Gareth Varey responded saying with words to the affect of Â "Oi don't be nasty to her don't you know who she is" or something like that. Gareth was then apparently treated to a some Scottish hospitality of the forehead variety as above.

All this resulted in Tulisa and security guards having a few words etc. depends on which version of events you believe.

Another colourful day in the life of Tulisa Contostavlos who's surname is a bit of a mouthful *cough*. 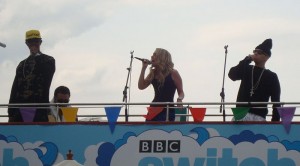