2 Brigadiers and and a Major General have joined anti-government protesters in their campaign to removeÂ  Ali Abdullah Saleh from power who has ruled the Yemen since 1978.


The news comes after Yemen's ambassador to the UN and many government ministers including the Human rights Minister Huda al-Baan resigned over the killings on Friday. There has also been a plea by Muslim clerics for soldiers to disobey orders to shoot protesters.

Head of the first armoured division and north west military zone, Brigadier Ali Mohsen Saleh said said he has deployed his units to protect protesters against the government.

At a news conference he said "Yemen today, is suffering from a comprehensive and dangerous crisis and it is widespread.Â  Lack of dialogue and oppression of peaceful protesters in the public sphere, resulted in crisis which has increased each day.Â  And it is because of what I feel about the emotions of officers and leaders in the armed forces, who are an integral part of the people, and protectors of the people, I declare, on their behalf, our peaceful support of the youth revolution and their demands and that we will fulfil our duties".

The protests continue despite the government's hard-line approach and the defection will come as welcome news to those taking to the streets. 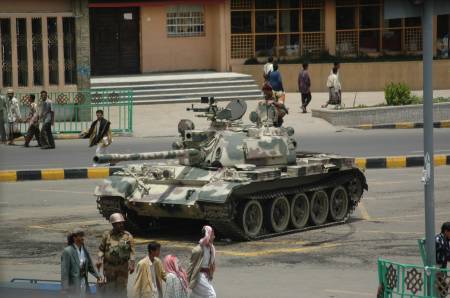 Jonnie Marbles will never need to pay for beer again