With all the rate rigging and mis-selling scandals that weigh heavily around the banking industry up comes a government minister to argue that we need another new financial product to address the UK’s pension problems.

You just could not make it up. A pension is a financial services product, a product that currently has problems in that many people are going to be very disappointed in how their own fund has performed. They may still face hardship in their retirement despite having saved diligently over the years. This has led to fears that people could lose faith in saving for their retirement saddling the government with a pension crisis.

But what is the government’s response? A private insurance scheme that ‘guarantees’ an income on retirement. That is, yet another financial services product bolted onto a pension to compensate for the ups and downs of the markets that the pension scheme itself should have been able to weather. This proposal comes at a time when some banks are right now under investigation for mis-selling interest rate swaps alongside loans to protect small business loans, which actually had the opposite effect, crippling those same businesses.

In his quest to make ‘defined ambition’ pensions work, the pensions minister, Steve Webb, wants the banking industry to restore the nation’s confidence in pensions and saving for the future by introducing this insurance policy, the cost of which is estimated to be about Â£30 a year.

Now call me a cynic, but aren’t pension fund rules designed to achieve this payout ‘smoothing’ by saving in the good times and paying out more in the bad? And with all the money going in to the pensions industry every year will a mere Â£30 per saver make any difference? How will that generate a pot large enough to fill funding gaps? Especially when much of it will, as usual, be soaked up by fees. Unless of course the government is going to stand behind every one of these policies (now would that surprise you?).

How long then before we hear that the insurance schemes are not keeping up with projections, you know like endowments ended up not covering interest only mortgages, therefore requiring more money to be pumped into them. 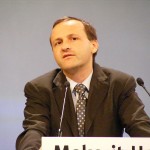 No the real problem for savers is not the business cycle it is government and banks. Savers’ money is a huge pot into which the taxman and clever people in pinstriped suits working for powerful banks can dip their hands at will. Without that one could argue that the pensions would be doing very well thank you. This new financial product is just another in a long line of skimming tools.

Which is why every modern political response to every problem is more debt, more tax and more money channelled through the banks.