YO! Sushi Signs At Whiteley

YO! Sushi has signed a new lease for a 1,800 sq ft custom built, standalone glazed pod at the Whiteley retail and leisure destination in Hampshire, a joint venture development between British Land and Universities Superannuation Scheme (USS).

Occupancy has now reached 94% at the 320,000 sq ft scheme which has welcomed more than two million visitors since it opened in May. YO! Sushi joins a host of quality restaurants and cafes including Caffe Nero, Chimichanga, Costa Coffee, Dean's Diner and Prezzo.

In early 2014, work will also start on Whiteley's second phase which comprises 30,000 sq ft of additional restaurants, leisure and community uses as well as a 30,000 sq ft nine-screen cinema which has been pre-let to Cineworld.

"YO! Sushi will broaden Whiteley's appeal even further and extend the centre's trading hours by continuing to establish the scheme as a night time destination. Whiteley's first phase now provides a range of quality day and evening food and drink options, ensuring there is something to suit every taste and occasion."

Kieran Sherlock, Head of Property at YO! Sushi commented: "We're thrilled to be opening in the brand new retail experience at Whiteley. Our new and uniquely designed restaurant will allow an entirely new audience to discover the fun, fast and fresh YO! Sushi dining experience. We chose Whiteley because we were impressed by the catchment, the quality of the environment, the retailer line up and the strength of the first four months of trading. YO! Sushi is confident Whiteley will provide a solid platform to help the brand continue to flourish. As the centre continues to go from strength to strength, we are excited to be a part of its success and look forward to welcoming the local community into our new restaurant." 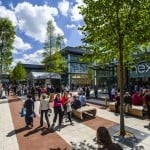 Whiteley benefits from a large and affluent catchment of 1.2 million people with an estimated £3.1 billion potential spend. The catchment is set to expand further in the foreseeable future with 3,500 new homes at North Whiteley.

Situated between the two harbour cities of Portsmouth and Southampton and adjacent to a Tesco supermarket, the scheme benefits from excellent accessibility via junction nine of the M27.

Calculating The Cost Of Moving