Persistent punting by political pundits has persuaded William Hill to cut the odds of the SNP ending up as part of a coalition government following the General Election, from initial odds of 13/2 to 9/2 – making that the second favourite government to be formed, behind only a repeat of the Con-LD coalition – slightly better fancied at 4/1.

'All of a sudden the SNP has become extraordinarily pivotal in polical pundits' thoughts of what might happen in the event of another Hung Parliament – which is now a heavily backed 3/10 chance' said Hill's spokesman Graham Sharpe. 'It seems far-fetched to see the SNP, who won just six seats at the last General Election, quite possibly ending up as the third largest Party in Parliament, but opinion polls are suggesting they have every chance of achieving that.'

The SNP are odds-on to win more seats at the General Election than the Lib Dems, who won 57 last time, say Hills, who have opened a book on who will come out on top between the two, and have installed Nicola Sturgeon's Party as 4/7 favourites, with Nick Clegg's team offered at 13/8 and a tie between the two rated an 9/1 shot. 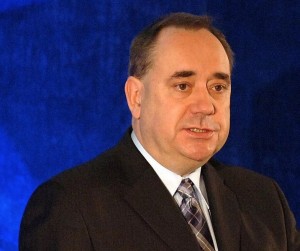 Hills also offer 6/1 that Alex Salmond, 1/8 to win a seat in the Gordon constituency will become a government minister. They also quote 4/1 that there will be another Scottish Independence Referendum before the end of 2020.

To add to Lib Dems misery, Hills make UKIP 4/11 to poll more votes than the Lib Dems, who are 2/1 to do vice versa.