The latest Household Economic Activity Tracker (HEAT) survey by YouGov shows that a negative sentiment still prevails in the UK.

YouGov surveyed 6,542 UK residents between 1st and 31st of December 2011 and based on an index that runs from zero (total pessimism) to 200 (total optimism) the overall response was 88. Some way below the 100 balance.

The HEAT index is an overall measure of consumer sentiment, how they feel about the economy based on four metrics: house prices, job security, their family finances and business activity.

The YouGov HEAT graph below, which tracks back to when data started to be collected in Feb 2001, shows that there has been little optimism within the last nearly three years. 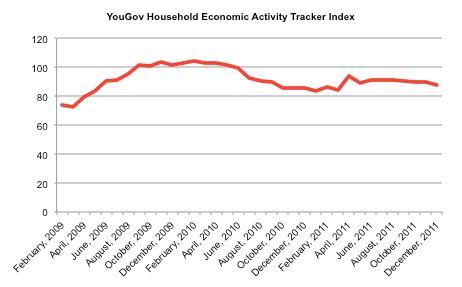 Job security sentiment took a bit of a nosedive between November and December 2011 falling some four points to 96. It had been steady hovering between 98 and 101 since April. YouGov have stated this as ‘…the major concern for consumers, with 28% identifying it as a very major threat’.

The business activity metric has been declining since its July 2011 high of 121, but is still well in positive territory at 109.

Homeowners see the value of their properties remaining static (58%) or falling in the future and the Home Value Index is 87, much higher than the February-April 2009 lows of about 50 but still far short of the highs of 0ver 140 seen in late 2009 early 2010.

But December 2011 also saw an increase in the household spend that nearly equalled that of 2009 and far above that of 2010, which YouGov says shows that for some at least the economic position is seen as ‘less dire’ than a year ago.

However the YouGov Macroeconomic Sentiment tracker has indicated that there is a growing expectation of a recession/depression, with odds of 35% on there being another recession.