It had to happen. After pouring vast amounts of our collective wealth into property without actually building enough of it to house ordinary folk, many people are now finding themselves being crammed into smaller living spaces with the inevitable adverse consequences.

The following research of 1,167 couples living in flatshares in the UK by SpareRoom.co.uk over the last two months indicates the repercussions this is having on the lives of many people.

As more and more Brits are priced out of the UK property market, a worrying 44% of couples who have no choice but to live in flat or houseshares say the predicament is affecting their aspirations to settle down and start a family. Another 36% said that, although they had no immediate plans to start a family, they believe their living situation could affect their future plans.

Flatshare website SpareRoom.co.uk surveyed couples currently renting rooms in shared accommodation to learn more about their attitudes to their living arrangements. Just like individuals trapped in the private rental sector and unable to buy, eight out of ten UK couples (80%) living in flat and houseshares say they cannot afford to get onto the property ladder or rent on their own, as deposit funds are eroded by the high cost of living and banks are still cautious about lending at high LTVs.

The results reveal that 14% of couples who would like to buy cannot see their way out of the rental sector, saying they will never be able to afford to get onto the property ladder. While 45% of couples polled are aspiring to quit their house shares and rent on their own within the next two years, another 13% say they cannot even afford to move out of flatshares in the forseeable future.

Due to the soaring costs of living, only a fifth (21%) of couples currently living in flatshares are actually saving up to buy a property. More than one in ten (12%) of those polled say they are saving up to buy a property in the next five years, while 9% say they are saving, but will not be able to afford to get on the property ladder for at least five years.

While 12% of couples say they are flatsharing because they enjoy the social aspect of living with others, flatsharing as a couple is not always as simple as renting as an individual. More than a third (35%) of respondents say the biggest challenge they face is finding flatshares that will accept couples. A fifth (21%) say lack of storage space is the biggest issue for flatsharing couples, while 19% cite managing to spend time alone with their partner as their main gripe. Another 16% say that trying not to make their housemates feel uncomfortable around them is their greatest challenge.

Matt Hutchinson, director of Spareroom.co.uk, comments: “It’s an unfortunate predicament that many couples living in flat and houseshares can’t even afford to rent on their own, let alone buy a home together.

“Living in a flat or houseshare as couple and splitting the rent means you’ll pay half as much, but there are drawbacks. Single flatsharers might not be comfortable living with a couple, not just from a social point of view, but because an extra person using the household appliances, sharing the fridge and cupboard space, fighting over the remote control, might not be an appealing living arrangement to everyone. This means that couples may encounter some reluctance from potential flatmates when they hunt for shared accommodation, which the majority of couples we surveyed cited as their biggest challenge.

“The problems these couples face highlight how difficult the current economic situation is for first time buyers. If a couple who already split rent and bills between them can’t save for a deposit, what chance does everyone else have?” 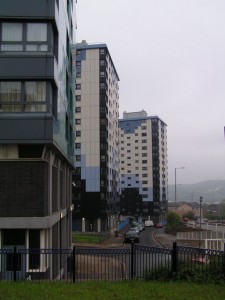 Blocks of flats by Nigel Chadwick