A study by the Children’s Society shows that most young people across the UK believe that poverty was one of the root causes for the recent riots, which sparked off in London after the death of Mark Duggan.

This is at loggerheads with the government’s position that the riots were largely down to unruly families, organised crime and opportunistic thieves.

The shooting of Mark Duggan by the police now seems to be regarded as raising the tension between police and the public but not as the cause of the intense rioting that saw five deaths, many injuries and over Â£200 million in damaged property.

According to the Home Secretary, Theresa May, the rioters were just an ‘unruly mob’, made up of people were out to thieve, ‘pure and simple’.

The Home Secretary wrote in the Mail on Sunday that the riots had nothing to do with anything other than ‘instant gratification’ for the rioters.

But the Children’s Society Policy Director, Enver Solomon, said of the study ‘Behind the Riots’:

This research shows that Theresa May is out of step with the majority of children and adults in this country when she said on Wednesday the riots were about instant gratification. Most people believe that the riots were caused by a whole range of factors – and poverty and material disadvantage are at the heart of it.

Material well-being cannot be overlooked as a significant issue affecting young people today. We know from our work that there is a significant link between a child’s material deprivation and their overall life satisfaction. Clearly, tackling this is crucial to avoid further unrest among children and young people.

It is equally worrying to see just how many children and young people, already battling very negative views of themselves as a group, felt perceptions of them had got worse since the riots.

Our findings show that there is agreement between adults and children that the government should be providing more support to young people. This sends a clear message to central and local government that the public would like to see more positive activities on offer to children rather than a reduction in out of school youth provision. With the considerable challenges now facing children and young people in early adulthood, the case for investing in youth support must be taken seriously.

The study surveyed 13-17 year olds as well as adults and found that: 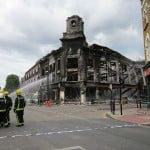 Most of them believed that ‘…the main reasons behind the worst disturbances in this country since the 1980s was “to get goods and possessions they couldn’t afford to buy”.’

Most people also chose more than one reason for the riots.

Behind the Riots also found that one in seven young people believed their prospects had reduced since the riots and that 17 year olds were most likely to put the cause of the riots down to government cuts.

Green Party: A living wage for all can help rebalance our economy