Young women who are most at risk of developing cervical cancer are the least likely to be offered the protective HPV jab and to complete the full course when they are, reveals research published online in the journal Sexually Transmitted Infections.

These women need to be better targeted to boost the overall uptake of the vaccination programme, which was well below the 80% required to make a significant difference to cervical cancer rates during its first three years of operation, say the authors.

They base their findings on responses to anonymous questionnaires completed by 2247 young women aged 13 to 19, and comparative national lifestyle data for this age group.

All the participants were attending sexual health clinics located in 19 hospitals and 13 community services across England between March and August 2011.

The survey respondents had much higher rates of factors known to increase the risk of developing cervical cancer than their peer group, as evidenced from the national data.

Twice as many survey respondents as the population average were not in education, training or work, known as NEETs (8% vs 2%). They also had a higher prevalence of smoking and more sexual partners.

Three out of four (74%) respondents had been offered the HPV jab, mostly in schools (60%). 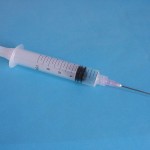 Over half (57%) of those who refused the jab when offered it, said they might have accepted if they/their parents/friends had been better informed about its purpose, while around one in five (22%) said they had not been followed up.

Low participation in the HPV vaccination programme puts these women at risk of developing cervical cancer, and may also extend into adulthood and so affect their uptake of cervical cancer screening, warn the authors.

Low participation may also undermine the effectiveness of the programme, they add.

“Although the [Department of Health] has no explicit targets for vaccine completion, modelling work predicted a significant impact on cervical cancer deaths with an 80% uptake of all three doses,” they write.