Hometrack’s September National Housing Survey has revealed zero house price growth this month – the first time house prices have not increased for 19 months. The market has been cooling since May, but growth has now completely stalled.

Continued weakness in demand is behind the loss of momentum in price growth (demand fell by 2.1% this month), but also comes from a reduction in pent-up demand, which previously drove the market and was compounded by the launch of Help to Buy in early 2013. The balance between supply and demand has moved into negative territory in the last three months, further reducing upward pressure on prices.

While the impetus for house price growth has dissipated across all parts of the country, London is experiencing a pronounced slowdown in market activity, with continued declines in the proportion of asking prices being achieved. London was the only region to record a price fall in September – of just -0.1% – with further modest price falls likely in the months ahead. 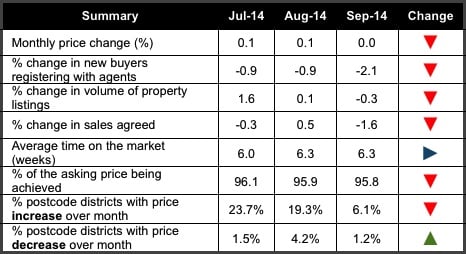 ♦ House prices are unchanged in September. This marks the first time in 19 months (January 2013) that prices have not registered an increase in a month.

♦ The balance between supply and demand has narrowed rapidly in the last five months and is now negative – pointing to a slowdown in house price growth.

♦ Demand for homes fell by 2.1% this month. The number of new buyers registering with agents has now fallen every month of this quarter, and by 4% over the last four months.

♦ The London market continues to cool: it registered a price fall of -0.1% in September, with 5% of the capital registering price falls compared to less than 1% seeing higher prices.

♦ The time taken to sell has reduced across all other areas in the last 12 months as general market conditions have improved.

♦ In addition, London and the South East are registering clear declines in the proportion of the asking price being achieved, on weaker demand and longer sales times. This is compared to a marginal drop in asking prices achieved overall (which is, however, the fourth consecutive monthly decline).

♦ While seasonal factors are at play, the coverage of markets registering price rises has actually been slowing for the last five months, since April 2014.

“There’s a distinct chill in the air this month: after a strong run over the last 18 months, the momemtum of house price rises has started to turn with growth now at a standstill for the first time since January 2013.

“While this slowdown can be attributed partly to seasonal factors – including a slight hangover from a slow August – it’s clear that agents are wary about  the direction of the market as a resut of  weaker demand and lower sales volumes. Buyer uncertainty is growing in the face of a possible interest rate rise, a general election on the horizon and recent warnings of a house price bubble. The debate over economic implications for Scottish independence could well have added to the uncertainty in recent weeks. Played out against a backdrop of tougher mortgage affordability checks and limits on high loan to income lending, higher value postcodes of inner London are clearly being impacted.

“This loss of momentum in price growth comes at the end of a very strong run of 18 months, in which the market was fuelled by pent-up demand, with Help to Buy fanning positive market sentiment. That surge of demand has now receded, bringing the latest cycle to an end with no equivalent buyer ‘push’ or ‘pull’ on the horizon.

“Although the lead indicators suggest that buyers will start to gain the upper hand, there are many home owners who don’t need to sell and won’t bother unless it’s financially beneficial to do so. The net result is a likely drop-off in activity in the coming months. As the build up to the election in 2015 draws imminent and political parties use the conference season to delinate their views, we anticipate an impact on market activity.”