The internet is awash with reports of a zombieÂ apocalypse in Miami after a naked man was shot by police for refusing to stop eating another naked man's face.

Police approached the area of the crime acting in response to a 911 call on Saturday at the Macarthur Causeway close to the Miami Herald offices, the cameras of which recorded much of the incident.

When the police arrived at the crime scene the attacker was, according to numerous reports, eating the face ofÂ theÂ victim which included his nose and eyes to the point where the face was no longer there.

The police then told the attacker to stop eating the face of his victim to which the response was a growl.

After quickly assessingÂ theÂ surrealÂ situation the police then opened fired on the attacker, however the bullets did not stop him so they shot him a few more times until he was no longer moving and presumed dead.

It is the latter part of this report which has stirred up the interest of the ZombieÂ apocalyptic fraternity and questions are rebounding around the internet as to whether or not it was a head shot which stopped the assailant in his dastardly deed. [according to Zombie fantasy literature a head shot being the only way to kill a zombie.]

The poor victim of this assault was taken to Jackson memorial hospital and his condition is unknown and the police are keeping this information under a tight grip.

ButÂ unfortunatelyÂ for fans of the macabre this may be the result of a batch of bad Lysergic acid diethylamide, commonly known in itsÂ abbreviatedÂ form asÂ Â LSD.

According to reports in CBS Miami, if the attacker was under theÂ influenceÂ of bad acid then the incident could be the fourthÂ  where someone has freaked out and stripped their cloths off, a reaction to the increase in body temperature caused by the drug.

In the other cases the individuals were also violent and growling, however this is the first case where someone has eaten someone else's face.

It does seem as though there is a rational explanation for this attack, then again it could be a cover-up designed to contain panic.

One thing is for sure, there will be a lot of people stocking up on tinned food and firearms in Miami over the next few days.

Nothing new there then. 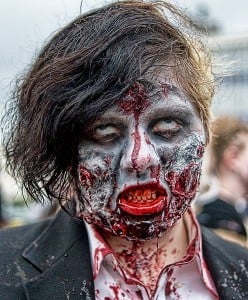 Euro survival: it’s all up to the Greeks for now

Levy says 'reflation' of US economy unlikely in 2013